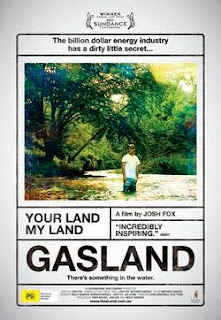 Fox begins his film by telling his audience that he received a letter from a natural gas company offering to lease his family’s land in Milanville, Pennsylvania for $100,000 to drill for gas. That started Fox’s quest for information about natural gas drilling. He discovers that all across America, rural landowners get lucrative offers from energy companies wanting to lease their property. These companies want to tap into large, underground reserves of natural gas.

A hydraulic drilling process called fracking, this preferred method of drilling was developed by Halliburton. The evidence, disputed by energy companies and people sympathetic to them, is that fracking poisons water sources. From the heartland, across the South, and back to the Northeast, Fox finds people whose water is so contaminated by chemicals used in the fracking process that the water can burst into flame, even when lit by a match. Fox’s film questions whether natural gas is really a viable alternative to our dwindling energy resources. If it is, does its potential harmful effects to the nation’s water supply outweigh the benefits of natural gas?

Visually, GasLand is quite potent. It has a visual kick, and sometimes those visuals are poetic and lyrical. I don’t know how effective the film will be in the long term. While its premise is simple and its subject matter straightforward, GasLand seems overripe with information; there is just so much depicted here, particularly in terms of how many people are suffering because of fracking. Still, the film’s sense of urgency is palatable.

Environmental experts predict that finding fresh water is going to be a problem for many humans in the 21st century. Thus, the most effective element of GasLand is its portrayal of energy companies and their determination to extract natural gas through fracking, regardless of the environmental consequences. The men that run these companies seem not to have a care in the world that real people can be and are being negatively impacted by fracking. This means that GasLand is a call-to-arms, an activist documentary that must be seen simply because this is about all our futures.

Posted by Leroy Douresseaux at 7:25 PM