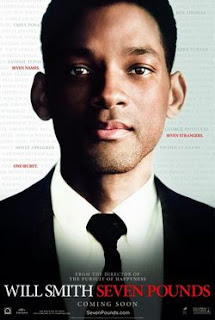 I don’t know how many readers of this review will remember Beloved. This 1998 film was Oprah Winfrey’s big screen adaptation of Alice Walker’s 1987 novel of the same name (which won the 1998 Pulitzer Prize for Fiction). Beloved, directed by Oscar-winner Jonathan Demme, was a technically well-made film, but was almost unwatchable because it was so depressing, heartrending, and morbid. The plot, characters, and setting were so gloomy that when I saw it, it seemed as if a pall had been cast over the theatre. There is a point when a movie is so sad that it can’t be entertaining.

Seven Pounds is a reunion of actor Will Smith and director Gabriele Muccino, who together made 2006’s The Pursuit of Happyness. Happyness was well made with good performances, and while the film featured Will Smith’s character undergoing so many hardships, he was ultimately triumphant, and the film was hugely entertaining. Seven Pounds is well, with good performances, but is so damn dark that watching it is really like having to sit and experience something irritating and painful for two hours.

The film focuses on Ben Thomas (Will Smith), a mysterious IRS agent with a somewhat arrogant air who loves to surprise clients with unexpected visits. He also goes out of his way to help people in need. Why would an IRS agent do that, and why is it so obvious that he’s hiding something? After he meets, Emily Posa (Rosario Dawson), an ailing young woman with a fatal heart condition, Ben begins to fall in love with Emily, and that causes him to struggle with completing his shadowy mission of redemption.

It’s safe to assume that Seven Pounds, a weighty, dramatic, star vehicle, is Will Smith’s attempt to make another run at getting Oscar recognition. As such, Smith probably would have better served his ambitions if Seven Pounds was less dour, sour, and gloomy and was instead more upbeat. Movie reviews and Sony Pictures, the studio behind Seven Pounds, have gone to great lengths not to give away too much about Seven Pounds’ plot, but honestly, most viewers will figure out Ben Thomas’ scheme and why he’s scheming 10 minutes (20 tops) into the film. So, I’m not giving anything away by saying that if Thomas’ efforts at redemption are so noble, then, he should be at least a little more lighthearted about the goal he has freely set for himself.

In a way Seven Pounds is too obtuse and too European. I say that because Seven Pounds’ director Gabriele Muccino comes out of a tradition of European cinema in which film narratives gladly go into the dark places of the human condition. There are characters in some European films that have excellent intentions, but their methods for doing something noble for other characters are jaw-dropping and even scandalous (see the wonderful, heartrending Danish film, After the Wedding, which is similar in passing to Seven Pounds).

Regarding Ben Thomas’ absolutely shocking plan, much of the audience for American films will be put off by someone like him, who so fits the saying “wears his emotions on his sleeves.” One can certainly question Thomas’ real agenda and intentions. Does he seek redemption, or is he just a guilty coward, or is he just a self-appointed martyr? In such a character, we would prefer a grim but determined, grieving but genial fella with a smile that can brighten our days even while we can see the sadness in his eyes – the kind of character played by Cary Grant, Jimmy Stewart, or Tom Hanks.

Instead, we get a Will Smith, practically wearing rags and his face covered with ash. Smith, an underrated actor who gives a good performance here, shows an impressive range of emotions in Seven Pounds – most of them of the sadder, negative variety. Seven Pounds is a good movie, but in the end, its darkness makes it too heavy to be entertaining or a great film.