Review: Kenneth Branagh Makes Much Magic in "Much Ado About Nothing" 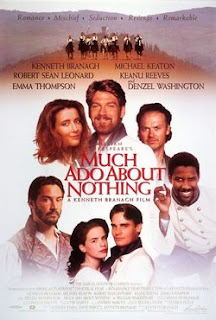 COMEDY/ROMANCE with elements of drama, music, and musical

Kenneth Branagh earned two Oscar-nominations (acting and directing) for his 1989 film, Henry V, a screen adaptation of William Shakespeare’s stage drama. Branagh brought the Bard back to the screen for a second time under his direction with the 1993 film, Much Ado About Nothing, which received a 1993 Golden Globe nomination for Best Motion Picture – Comedy/Musical (and an Independent Spirit Award nom for “Best Feature”).

A high-spirited tale of love, mistaken identity, and bawdy humor, Much Ado About Nothing is set in Messina (Sicily), where hot-bloodied youth, Claudio (Robert Sean Leonard), is engaged to marry a beautiful young woman named Hero (Kate Beckinsale). Claudio is so anxious to wed that his best friend, Don Pedro (Denzel Washington), devises some mischief to distract Claudio. Don Pedro concocts a romantic trap for Hero’s cousin, the sharp-tongued Beatrice (Emma Thompson, Independent Spirit Award nomination for “Best Female Lead”) and the man she most loves to hate, Benedick (Kenneth Branagh). However, amusement turns to horror, scandal, and tragedy by the hand of Don Pedro’s rakish brother, Don John (Keanu Reeves), who schemes to destroy the engagement and marriage of Claudio and Hero. Can the chance intervention of the local law, Dogberry (Michael Keaton), restore the love and laughter to this circle of friends?

It’s almost hard to believe, but Much Ado About Nothing manages to be ravishing entertainment, engaging brain food, and a finely crafted costume drama in only 102 minutes of screen time. It’s a sexy, joyous romp filmed with delightful rudeness, playful sexual innuendo, and the sun-drenched charm of its shooting location (Chianti, Toscana, Central Italy). It takes an attentive ear (and more patience than many moviegoers are willing to give) to hear every Shakespearean word and turn of a phrase, but the cast’s exuberant delivery of the Bard’s masterful language is… well, masterful.

If the good acting weren’t enough (Branagh and Emma Thompson actually outshine the rest of this talented cast of movie stars and fine character actors), this exuberant production is filled with lively songs, musical numbers, and a soaring life-giving score. If you like Shakespeare on the big screen, this is a gift for you. If you never believed that Shakespeare could be so funny and sexy, Branagh and his cohorts will convert you into a true believer.