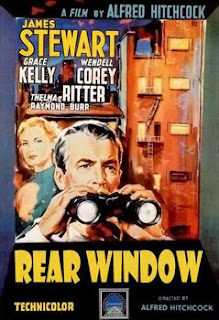 Director Alfred Hitchcock received one of his six Oscar® nominations in the category of “Best Director” (he never won) for the classic mystery/thriller, Rear Window. Although many recognize the film as a masterful technical exercise, it is the film’s technical aspects that make it so special. Without Hitchcock’s bravura display of framing, shooting, and movement within the film, Rear Window would be a nice mystery flick; Hitchcock’s expert choices and subtle use of strong visual language makes it a quietly intense thriller and mystery picture.

The plot is simple. L.B. “Jeff” Jeffries (James Stewart) is a globe trotting photographer laid up with a severely broken leg. Jeff’s stuck in his apartment during a blistering summer heat wave, so he takes to spying out of his rear window on his Greenwich Village neighbors, using his powerful camera and photographic equipment. That’s fine, but things turn hotter when he suspects that his neighbor directly across the way, Lars Thorwald (Raymond Burr), has murdered his invalid wife. He convinces his girlfriend, Lisa Carol Fremont (Grace Kelley), of his theory, and though she’s busy trying to convince Jeff to marry her, Lisa stops to involve herself in Jeff’s investigation. Jeff also convinces his nurse, Stella (Thelma Ritter), that Thorwald murdered his wife, but he can’t sell it to his World War II buddy, police detective Lt. Thomas J. Doyle (Wendell Corey). Still, Jeff, Lisa, and Stella advance their own private investigation, but it moves them towards danger once Thorwald realizes that someone is watching him.

Although the film is ostensibly about voyeurism, Rear Window shows a fascination that people have with other people’s life. Hitchcock had a huge self-contained world created in the form of a film sound stage so that he could fashion the other lives of which his main character Jeff would be curious. As much as I wanted to follow the plot of the murder mystery (which Hitchcock slowly reveals with delicious anticipation), I was equally curious about the lives of Jeff’s other neighbors.

Hitchcock shoots practically the entire film (except for a few shots) from Jeff’s apartment, using the camera to spy out of Jeff’s rear window on the neighbors. This is one of the greatest examples of how the camera cannot so much manipulate as it can mesmerize an audience. With hypnotic intensity, I followed the camera’s every move, vainly trying to absorb as much as I could.

Rear Window is a film that stands the test of time not so much because of its subject matter, but because it is a technical masterpiece, a virtuoso display of cinematic technique. What keeps this film from being perfect are the performances and story. James Stewart and Grace Kelly are working purely on star power and relying on the fact that Hitchcock’s direction will do much of their work for them; for much of the film’s first three-quarters, Ms. Kelly merely just moves around looking like the goddess she was.

The murder at the center of the story lacks drama, mainly because we never get to know the Thorwalds and their private drama. Thus, Mrs. Anna Thorwald (Irene Winston) doesn’t garner much sympathy; it’s as if she’s just another murder statistic. It’s Hitchcock’s specific execution of the plot and his unique vision of filming the script that take this to another level, so it’s not to be missed by people who really like watching movies, not just as a pastimes, but as the work of artists and craftsmen.