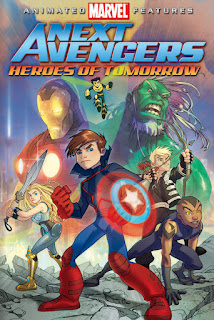 “Marvel Animated Features” was a line of eight direct-to-DVD animated superhero films made by MLG Productions.  MLG was a joint venture between Marvel Animation (then called Marvel Studios) and Lions Gate Entertainment to produce direct-to-DVD animated films for the home entertainment market.  The first film in the series was Ultimate Avengers: The Movie, which was released to DVD in February 2006.

Next Avengers: Heroes of Tomorrow is a 2008 straight-to-video animated superhero film directed by Jay Oliva and Gary Hartle.  It was the fifth entry in the “Marvel Animated Features” line.  The film is based on the classic Marvel Comics franchise, the Avengers, which debuted in 1963 and was created by Stan Lee and Jack Kirby.  Next Avengers focuses on the children of the Avengers as they hone their powers and face the enemy that was responsible for their parents' demise.

Next Avengers: Heroes of Tomorrow is set on a world in which its mightiest superheroes:  Captain America, Iron Man, Thor, Giant Man, Wasp, Black Panther, Hawkeye, and Vision came together to protect Earth from its greatest threats.  They were “The Avengers.”  But one day, the Avengers fell before the might of the maniacal, mechanical foe, Ultron (Tom Kane), a robot.

Before they were defeated, the Avengers sent billionaire bachelor Tony Stark (Tom Kane) into hiding their children.  Twelve years later, at a hidden location, the son of Steve Rogers/Captain America, James Rogers (Noah Crawford); the daughter of Thor, Torunn (Brenna O'Brien); the son of Black Panther, Azari (Dempsey Pappion); and the son of Giant Man and the Wasp, Pym (Aidan Drummond); train under the tutelage of Tony.  The children, however, are growing restless, and their curiosity causes them to do something that brings them to Ultron's attention.

With their new ally, Hawkeye/Francis Baron (Adrian Petriw), the son of the original Hawkeye, these children of the Avengers will take on their parents' greatest adversary.  But will the children fall before this robot menace as their parents did?

Next Avengers: Heroes of Tomorrow is an entertaining superhero action-fantasy.  The action is engaging, and the plot is good, although it is not as well executed as it could be.  The resolution undersells the potential of the characters, as if the main purpose of this movie is just to quickly as possible wrap up the story even if it wastes the potential of both the children and the story.

The best things about Next Avengers: Heroes of Tomorrow are the children, the “Next Avengers.”  They are especially well written and their personalities, doubts, struggles, conflicts, desires, and goals all seem genuine.  James Rogers' desire to know his father, Captain America, and Torunn's prayerful pleas for the return of her father, Thor, are powerful and poignant.  Azari's cautiousness belies the fierce fighting spirit that dwells within him, and Pym's playful nature provides good comic relief.  Hawkeye is brave and bold and witty; he could carry his own film.  Obviously, the voice actors sell the dimensions of the character drama, and like the young characters, the actors keep Next Avengers: Heroes of Tomorrow from being mediocre.

Next Avengers: Heroes of Tomorrow isn't great, but the children of the Avengers are great characters.  Thus, it is a shame that this animated film is, after 14 years (as of this writing), the only film in which they appear.  I recommend that fans of animated superhero films and television series that feature Marvel Comics characters try Next Avengers: Heroes of Tomorrow.

Posted by Leroy Douresseaux at 3:38 PM