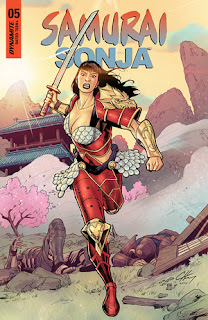 Dynamite Entertainment is now the publisher of Red Sonja comic books, and it publishes a number of titles featuring alternate versions of the character.  The latest is Samurai Sonja, Volume 1.  It is written by Jordan Clark; drawn by Miriana Puglia and Pasquale Qualano; colored by Kike J. Diaz; and lettered by Jeff Eckleberry.  This series is set in feudal Japan and introduces a brand new Sonja, a samurai serving a sea goddess in order to slay an oni shogun – with her life and family name on the line.

Samurai Sonja, Volume 1 #5 opens in the Sengoku period of Japan.  Sonja's journey to the fortress where she will confront the demon lord, Shuten Doji, has ended.  As the stories of their separate pasts emerge, Sonja and Shuten have something in common – the cycle of the story.  Is Sonja a hero or a mere pawn?  She will have to face the oni shogun and his dragon in order to secure a victory – a victory that might not be her destiny.

THE LOWDOWN:   Since July 2021, the marketing department of Dynamite Entertainment has been providing me with PDF review copies of some of their titles.  One of them is Samurai Sonja, Volume 1 #5, one of many Red Sonja-related comic books that I have read.

As I have said before, Jordan Clark is writing an epic comic book that not only respects the publishing history of Red Sonja the comic book character, but also explores the possibilities of the character.  Now, it has come to an end, and I wonder if Clark realizes that he has fashioned something that begs to continue.  Samurai Sonja mission pits its star against some of the most devious creatures of Japanese folklore, and the result is a thoroughly fun read.

I think that Sonja's singular focus on a target, the so-called “oni shogun” kept the narrative focus.  Clark could weave individual chapters featuring exciting figures of Japanese myth, and he could make them more than a distraction, but they were steps that Sonja has to take on the way to her destiny.

Artist Miriana Puglia captures a mood and mythical time with absorbing storytelling.  Puglia's stylish design and lively layouts pull the reader along on this epic adventure.  Kike J. Diaz's colors make Puglia's art pop and convey the sense of action and dynamism in the story, as well as its otherworldly nature.  Jeff Eckleberry's lettering captures the darker moods behind this story.

I think that Samurai Sonja will make an excellent trade paperback collection.  I will recommend it to you, dear readers, the way I have recommended this five-issue series.

I READS YOU RECOMMENDS:  Fans of Red Sonja will definitely want to read Samurai Sonja, Volume 1.