Comics Review: "PRODIGY: The Icarus Society #5" Has a Kick-Ass Ending 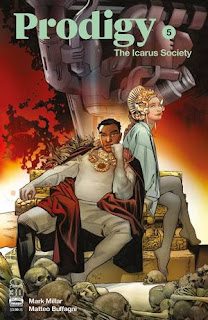 PRODIGY: THE ICARUS SOCIETY #5 (OF 5)
IMAGE COMICS/Netflix
STORY: Mark Millar
ART: Matteo Buffagni
COLORS: David Curiel
LETTERS: Clem Robins
COVER: Matteo Buffagni with David Curiel
DESIGN: Melina Mikulic
EDITORIAL: Sarah Unwin
VARIANT COVER ARTIST: Matteo Buffagni
36pp, Color, $5.99 U.S. (November 2022)
Rated M / Mature
Prodigy: The Icarus Society is a five-issue comic book miniseries produced by writer Mark Millar and artist Matteo Buffagni.  It is a sequel to the 2018-19 six-issue miniseries, Prodigy.  The Prodigy comic books focus on the adventures of the world's smartest man, Edison Crane, who believes that he is the go-to guy when there is a global crisis to solve.  Letterer Clem Robins and colorists Laura Martin and David Curiel complete the sequel's creative team.
Prodigy: The Icarus Society pits Edison against “The Icarus Society,” a secret society of geniuses who are all richer than Edison.  And now, he is caught inside the club's internal rivalries and blackmailed into hunting for the treasures of one of the most legendary locations of all time – Shangri-La.
Prodigy: The Icarus Society #5 opens in the airspace of Balochistan (a region that covers Afghanistan, Iran, and Pakistan).  There, in a fleet of helicopters, a mercenary force heads for Shangri-La.  With their help, Felix Koffka intends to steal the legendary city of its treasures and stand astride it much as he does The Icarus Society.  And he plans to rid himself of Edison Crane, and Felix believes that he is winning because he is smarter than Crane.
But both Crane and Shangri-La are full of deadly surprises.  And this time Koffka may have really flown too close to the sun.
THE LOWDOWN:  I have described the two comic book series that make up the Prodigy franchise as spinners of conspiracies, legends, myths, and lore that could rival cable network, The History Channel's “Ancient Aliens” television series.  Now, the fifth issue of The Icarus Society brings this astounding series to an end.
I can't get over the fact that Mark Millar is a wealthy executive for one of the world's most influential and most powerful media companies (Netflix), yet he still writes comic books.  And he writes such great comic books, such as this final issue of The Icarus Society.  It is obvious that Millar is still engaged with his readers because he is always challenging our notions and expectations.  He is still turning out these incredible comic books that always do the opposite of what is expected and offer genuine shocks and surprises.
Seriously, this is the good stuff.  Artist Matteo Buffagni saves all his explosives and blows up this story right in our faces with widescreen art and cinematic storytelling.  He gives Millar's story so much energy and makes this final showdown feel lethal.  Buffagni makes sure we understand that many characters will pay the highest and deadliest of prices.  David Curiel's colors make the art pop off the page, dazzling our imaginations.  Clem Robins uses his letters to deliver a pound-your-ass soundtrack, with its strains carrying on past the last page.
What a blast Millar, Buffagni, and company have delivered in Prodigy: The Icarus Society #5, with its diabolical villain, queen of a lost world, and exquisite retribution.  And I don't want to forget the tease at the end.  Girl, the next Prodigy series will rock all the casbahs.
I READS YOU RECOMMENDS:  Fans of Mark Millar and of his comic book, Prodigy, will want to read Prodigy: The Icarus Society.
A+
Reviewed by Leroy Douresseaux a.k.a. "I Reads You"
https://www.mrmarkmillar.com/
http://www.millarworld.tv/
https://twitter.com/mrmarkmillar
https://www.netflix.com/
https://twitter.com/netflix
www.imagecomics.com
https://twitter.com/ImageComics
The text is copyright © 2022 Leroy Douresseaux. All Rights Reserved. Contact this blog or site for reprint and syndication rights and fees.
--------------------
Amazon wants me to inform you that the affiliate link below is a PAID AD, but I technically only get paid (eventually) if you click on the affiliate link below AND buy something(s).
Posted by Leroy Douresseaux at 5:24 PM