Review: Spielberg's "1941" - Raiders of the Lost Invasion (Countdown to "The Fabelmans") 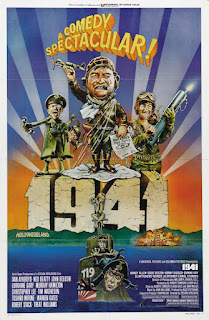 TRASH IN MY EYE No. 67 of 2022 (No. 1879) by Leroy Douresseaux
1941 (1979)
Running time:  118 minutes (1 hour, 58 minutes)
MPAA – PG
DIRECTOR:  Steven Spielberg
WRITERS:  Robert Zemeckis and Bob Gale; from a story by Robert Zemeckis, Bob Gale, and John Milius
PRODUCER:  Buzz Feitshans
CINEMATOGRAPHER:  William A. Fraker (D.o.P.)
EDITOR:  Michael Kahn
COMPOSER:  John Williams
Academy Award nominee
COMEDY/HISTORICAL/WAR
Starring:  John Belushi, Dan Aykroyd, Christopher Lee, Nancy Allen, Ned Beatty, John Candy, Elisha Cook, Jr., Bobby Di Cicco, Lorraine Gary, Murray Hamilton, Dianne Kay, John Landis, Michael McKean, Tim Matheson, Toshiro Mifune, Dick Miller, Warren Oates, Slim Pickens, Mickey Rourke, Lionel Stander, Robert Stack, Dub Taylor, Treat Williams, and Frank McRae
1941 is a 1979 comedy, war movie, and period film directed by Steven Spielberg.  Although not as popular or critically acclaimed as Spielberg's earlier films, 1941 began to gain in popularity after an expanded version of the film aired on television.  1941 is set almost a week after the Japanese invasion of Pearl Harbor and finds various California residents in a state of panic about an alleged inevitable Japanese attack on the state.
1941 opens on Saturday, December 13, 1941, at 7:01 a.m. (six days after the attack on Pearl Harbor).  Surfacing off the Northern California coast is a submarine of the Imperial Japanese Fleet, commanded by Akiro Mitamura (Toshiro Mifune).  Also aboard, as an annoying advisor, is Nazi Kriegsmarine officer, Wolfgang von Kleinschmidt (Christopher Lee).  Because he did not participate in the attack on Pearl Harbor, Commander Mitamura wants to destroy something in Los Angeles, in an act or honor.  He has decided to target “Hollywood,” although he and his crew are having trouble finding the place.
Meanwhile, in Santa Monica, servicemen from the U.S. Army and Navy have overrun the town.  Wayward youth, Wally Stephens (Bobby Di Cicco), is trying to hold on to his girlfriend, Betty Douglas (Dianne Kay).  She is the target of the unwanted attentions of Corporal Chuck Sitarski (Treat Williams), a member of a 10th Armored Division tank crew.  The crew, which also consists of Sergeant Frank Tree (Dan Aykroyd) and Private First Class Foley (John Candy), is suddenly dealing with its newest member, Private Ogden Johnson Jones (Frank McRae), a Black serviceman!
In Death Valley, the cigar-chomping Captain Wild Bill Kelso (John Belushi) of the United States Army Air Forces aims his fighter plane towards L.A. where he believes he will help fight off a Japanese attack.  Everything is going crazy around everyone, and there seems to be a hundred melodramas and subplots.  Can Americans stop fighting Americans long enough prevent a real Japanese attack on Los Angeles and the surrounding area?
I recently saw 1941 for the first time in preparation for this review.  Although I am a huge fan of Steven Spielberg, 1941 was one of his films that I was not really interested in seeing.  I found a DVD copy containing a “restored version” of the film that is almost half an hour longer than the original theatrical release.  When I was a kid, 1941 was considered a “box office bomb,” which is apparently not true.  The film reportedly did make a profit, but it was not as financially or as critically well received as Spielberg's previous films, Close Encounters of the Third Kind (1977) and Jaws (1975).
For what it is, 1941 is way too long, even at its original length (1 hour, 58 minutes).  Still, it is funny in many spots, and, in spite of a really large cast, all the individual subplots and comic melodramas do come together so that the film does not feel disjointed.  I like that 1941 gives me a chance to see some of my favorite actors:  Toshiro Mifune, Christopher Lee, Warren Oates, Ned Beatty, and character actors:  Dick Miller, Dub Taylor and Elisha Cook, Jr., all of whom are now deceased.  Another favorite, Robert Stack, practically steals the film as Major General Joseph W. Stillwell, a character that seems to center the film.  And I'm always happy to see Dan Aykroyd.
One thing that really stuck out to me is that much of 1941 seems like a dry run for the action sequences in my favorite Spielberg film, Raiders of the Lost Ark, which would be his next film after 1941.  The action in 1941 is conveyed in a humorous mood, and Raiders, more of an adventure film than an action film, features action scenes that are breath-taking, but are delivered with something like a wink and a nod.
Regardless of where it is positioned in Steven Spielberg's filmography, 1941 shows that, as the guy at the helm, Spielberg's most impressive talent may be his ability to gather a large cast and crew and very talented collaborators in order to make really spectacular films that are epic in scope, even in their quite and funny moments.  1941 is not a great film, but there are moments during this movie when it is obvious that one of the greatest filmmakers of all time is the guiding force and the main man behind it.
5 of 10
B-
★★½ out of 4 stars
Saturday, November 5, 2022
NOTES:
1980 Academy Awards:  3 nominations: “Best Cinematography” (William A. Fraker), “Best Sound” (Robert Knudson, Robert Glass, Don MacDougall, and Gene S. Cantamessa), and “Best Effects, Visual Effects” (William A. Fraker, A.D. Flowers, and Gregory Jein)
The text is copyright © 2022 Leroy Douresseaux. All Rights Reserved. Contact this site or blog for reprint and syndication rights and fees.
------------------------
-------------------------
Amazon wants me to inform you that the affiliate link below is a PAID AD, but I technically only get paid (eventually) if you click on the affiliate link below AND buy something(s).
Posted by Leroy Douresseaux at 3:01 PM