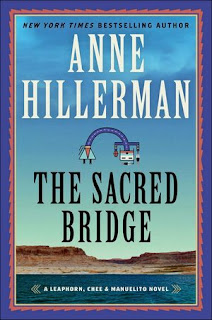 THE SACRED BRIDGE – (A Leaphorn, Chee & Manuelito Novel #7)
HARPERCOLLINS
AUTHOR: Anne Hillerman
ISBN: 978-0-06-290836-0; hardcover (April 12, 2022)
336pp, B&W, $26.99 U.S., $33.50 CAN
The Sacred Bridge: A Leaphorn, Chee & Manuelito Novel is a 2022 hardcover original novel from author Anne Hillerman.  It is the seventh novel in her “Leaphorn, Chee & Manuelito” book series, which began with Spider Woman's Daughter (2013).
This series is a continuation of the “Joe Leaphorn and Jim Chee Series” written by Hillerman's late father, bestselling author, Tony Hillerman (1925-2008).  The original series is the basis for “Dark Winds,” a television series from the cable network, AMC, and its streaming service, AMC+.  In The Sacred Bridge, Chee and Manuelito each investigate an unusual murder.
Navajo Nation Police Officer Bernadette “Bernie” Manuelito and her husband, Sgt. Jim Chee, are enjoying a vacation, but Bernie leaves early.  Jim Chee’s stay in beautiful Antelope Canyon and Lake Powell has a deeper purpose. He is on a quest to unravel a sacred mystery his mentor, the legendary police officer, Lieutenant Joe Leaphorn, stumbled across decades earlier.  Chee's journey takes a dark turn when, after a prayerful visit to the sacred Rainbow Bridge, he spots a body floating in Lake Powell.  The dead man is Curtis Walker, a Navajo with a passion for the canyon’s ancient rock art.  However, Curtis lived a life filled with many secrets, including an affair with a married woman and double-crossing one or more potential business partners.  In his mission to discover why Curtis died and who is responsible, Chee's will put his own life at risk.
Back at their home base of Shiprock, Bernie is driving home when she witnesses a black Mercedes sedan purposely kill a hitchhiker.  The search to find the killer leads her into an undercover investigation at KHF – “K'é Happy Farm,” a cannabis farming operation that was supposed to benefit the Navajo Nation.  However, the place is surrounded by mystery and rumors and also reports that workers are shooting dogs.  Even the guy who is supposed to own the place, Dino Begay Perez, is missing.  Bernie discovers a dangerous chain of interconnected revelations involving KHF.  It is an evil that jeopardizes both her mother and sister, Darleen, and puts Bernie in the deadliest situation of her law enforcement career.
THE LOWDOWN:  I have been crazy about Anne Hillerman's work since I first read Spider Woman's Daughter.  I had read two of her late father, Tony Hillerman's novels a long time ago, so I requested a review copy of Spider Woman's Daughter from HarperCollins when it was offered to reviewers back in 2013.  It was a fortuitous decision, as the “Manuelito, Chee & Leaphorn” series is one of my favorite modern literary series.
I don't know if I would call The Sacred Bridge a turning point in the series, but the story does suggest that big changes are ahead for both Bernie and Chee.  While Joe Leaphorn does not appear in the novel (although he plays an indirect part in the plot), Hillerman also hints of a big change for him.
Of all the books in this series, The Sacred Bridge is the one that I would most describe as a crime thriller or a suspense thriller.  Both mysteries that confront the lead characters are filled with danger, and it seems that their lives are always under threat.  It is not a spoiler to say that both come close to being killed, and Chee's case is filled with heartbreak that will vex some of the characters long after the story ends.  In Bernie's case, the characters end with hope and reunion.
As I have done with the previous books, I am heartily recommending The Sacred Bridge.  As usual, I was sad when I finished the last page.  I always want more, and, dear readers, if you give this book a chance, you will want more, also.
I READS YOU RECOMMENDS:   Fans of Anne Hillerman and of her late father, Tony Hillerman, will want to read The Sacred Bridge.
A
Reviewed by Leroy Douresseaux a.k.a. "I Reads You"
https://www.annehillerman.com/
https://twitter.com/harperbooks
https://www.instagram.com/harperbooks/
https://twitter.com/HarperCollins
https://www.harpercollins.com/
The text is copyright © 2022 Leroy Douresseaux. All Rights Reserved.  Contact this blog or site for reprint and syndication rights and fees.
-------------------------
Amazon wants me to inform you that the affiliate link below is a PAID AD, but I technically only get paid (eventually) if you click on the affiliate link below AND buy something(s).
Posted by Leroy Douresseaux at 11:11 AM