Comics Review: "THE MAGIC ORDER 3 #5" Preps for a Killer Finale 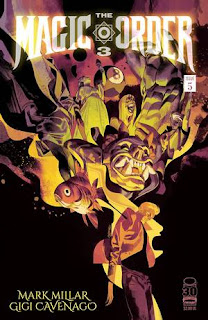 THE MAGIC ORDER 3 #5 (OF 6)
IMAGE COMICS/Netflix
STORY: Mark Millar
ART: Gigi Cavenago
COLORS: Valentina Napolitano
LETTERS: Clem Robins
EDITORIAL: Sarah Unwin
COVER: Gigi Cavenago
VARIANT COVER ARTISTS: Gigi Cavenago; Giada Marchisio
28pp, Color, $3.99 U.S. (November 2022)
Rated M / Mature
The Magic Order created by Mark Millar at Netflix
The Magic Order was a six-issue comic book miniseries written by Mark Millar and drawn by Olivier Coipel.  Published in 2018-19, the series focuses on The Magic Order, a band of sorcerers, magicians, and wizards – with a focus on the Moonstone family.  They live ordinary lives by day, but protect humanity from darkness and monsters of impossible sizes by night.  A second six-issue miniseries, The Magic Order 2 (2021-22), was recently published.
The Magic Order 3 introduces the Asian chapter of the The Magic Order.  A six-issue miniseries, this third installment is written by Millar; drawn by Gigi Cavenago; colored by Valentina Napolitano; and lettered by Clem Robins.  The series finds Cordelia Moonstone focusing her attention on the Asian chapter's Sammy Liu and his impossible wealth.  Meanwhile, the ghosts of an old conflict stir, and someone within the Order is living foul.
The Magic Order 3 #5 opens with the Order's favorite niece, Rosetta “Rosie” Moonstone, running to Moonstone Castle for help.  Meanwhile, Rosie is also snared in the murderous trap of Sasha Sanchez (“the Babysitter”).  And in the battle to save Rosie, someone is revealed to be a traitor or, at the very least, a dangerous breaker of the Order's rules.
THE LOWDOWN:  My favorite Mark Millar Netflix creation is The Magic Order.  It always surprises me, and before I read each issue I wonder not if, but how I will be surprised.
Millar and Cavengago, especially with this fifth issue, present so many surprises that words like “shocking” and “surprising” seem impotent next to the narrative twisters that tear through The Magic Order 3 #5.  This series is not at all what it pretended … or what I understood it to be.
Well, magic is change, and this series is magic unleashed all over the place.  The Magic Order 3 #5 may be more lurid in its revelations than the original series with its mass murder and conspiracies.  As I always say, Mark Millar respects his audience, maybe even adores them, because why else would he go to the trouble of constantly blowing our freaking minds?  Once again, I super-freakin' highly recommend The Magic Order 3, dear readers.
I READS YOU RECOMMENDS:  Fans of Mark Millar and of The Magic Order will want to read The Magic Order 3.
A+
Reviewed by Leroy Douresseaux a.k.a. "I Reads You"
https://www.mrmarkmillar.com/
https://twitter.com/ImageComics
https://twitter.com/mrmarkmillar
https://twitter.com/netflix
https://twitter.com/themagicorder
http://www.millarworld.tv/
www.imagecomics.com
The text is copyright © 2022 Leroy Douresseaux. All Rights Reserved. Contact this blog or site for reprint and syndication rights and fees.
-------------------------
Amazon wants me to inform you that the affiliate link below is a PAID AD, but I technically only get paid (eventually) if you click on the affiliate link below AND buy something(s).
Posted by Leroy Douresseaux at 2:19 PM