Review: "THE INVITATION" is the Movie Invite You Don't Want 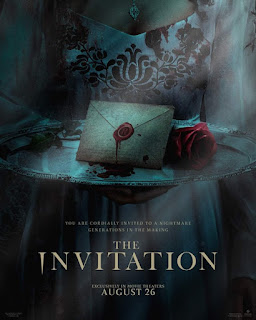 TRASH IN MY EYE No. 70 of 2022 (No. 1882) by Leroy Douresseaux
The Invitation (2022)
Running time:  103 minutes (1 hour, 43 minutes)
MPA –  PG-13 for terror, violent content, some strong language, sexual content and partial nudity
DIRECTOR:  Jessica M. Thompson
WRITER:  Blair Butler
PRODUCER:  Emile Gladstone
CINEMATOGRAPHER:  Autumn Eakin (D.o.P.)
EDITOR:  Tom Elkins
COMPOSER:  Dara Taylor
HORROR/MYSTERY/THRILLER
Starring:  Nathalie Emmanuel, Thomas Doherty, Sean Pertwee, Hugh Skinner, Carol Ann Crawford, Alana Boden, Stephanie Corneliussen, and Courtney Taylor
The Invitation is a 2022 supernatural horror, mystery,and suspense thriller from director Jessica M. Thompson.  The film focuses on a young woman who is swept off her feet by the chance of meeting members of her long-lost family, who are mysterious and odd.
The Invitation opens in New York City and introduces struggling artist, Evelyn “Evie” Jackson (Nathalie Emmanuel), who is still dealing with the recent death of her mother.  She and her best friend, Grace (Courtney Taylor), make a living freelancing for a catering business.  Evie takes a DNA test from an online company called “UnlockYourPast” and discovers that she has relatives in England.  She meets one of those alleged distant English cousins, Oliver L. Alexander (Hugh Skinner) of London.  Oliver tells Evie that she is related to him via her great-grandmother, Emmaline, who created quite a scandal decades ago.  He also invites her to an upcoming family wedding in Whitney, Yorkshire, England.
Evie and Oliver eventually arrive at New Carfax Abbey where several connected families: the De Villes, the Billingtons, the Klopstocks, and the Alexanders, have gathered for the nuptials.  Evie meets many family members, including the alluring Walter De Ville (Thomas Doherty), who seems to be the focus of everyone's attention.  However, Evie does not meet the bride and groom.  Before long, Evie discovers that not only is New Carfax a strange place, but also that the gathered family members are both eccentric and full of mystery.  It is a mystery that Evie must solve before she falls prey to the four families' darkest secrets.
The Invitation is a vampire movie and not a very good one.  The main reason is the vampire characters.  The film is inspired by author Bram Stoker's 1987 Gothic novel, Dracula.  Film vampires can be alluring and attractive, and they can often be the audience's favorite characters, although they are monsters and are often film villains.  The Invitation's vampires are not alluring and are mostly caricatures of the British upper class or assorted versions of Euro-trash.
The Invitation is not a very good horror movie simply because it is not scary.  Bumps in the night, shifty shadows, random yelps and screams, etc. are more annoying than chilling.  Evie is way too careless and clueless.  I understand that there are plenty of people in the real world who are not wary, who don't understand that when things seem too good to be true, they usually are too good to be true.  In this movie, the extent of Evie's lack of common sense is simply too much; it's irritating.
Also, I don't think that it is a coincidence that Nathalie Emmanuel, the actress who plays Evie, really resembles American actress Meghan Markle.  You know Meghan, right?  She married into an old British family that has its share of conspiracies and family members who are snobs, crypto-racists, and monsters.
The last twenty minutes of The Invitation – before the credits – are actually quite good, but by then it is too late.  I get why the studio and filmmakers would try to hide the fact that this film involves vampires as deep into the running time as they could.  Vampire films generally under perform at the box office, even good ones, which The Invitation is not.  Honestly, the last few minutes of this film could be used as the starting point for an even better film.  I cannot recommend The Invitation, and I want to discourage you, dear readers, from watching it if you have to pay to do it.
3 of 10
C-
★½ out of 4 stars
Tuesday, November 16, 2022
The text is copyright © 2022 Leroy Douresseaux. All Rights Reserved. Contact this blog or site for syndication rights and fees.
--------------------------
--------------------------
Amazon wants me to inform you that the affiliate link below is a PAID AD, but I technically only get paid (eventually) if you click on the affiliate link below AND buy something(s).
Posted by Leroy Douresseaux at 3:07 PM