Comics Review: "LORD OF THE JUNGLE Volume 3 #1" is a Good Start 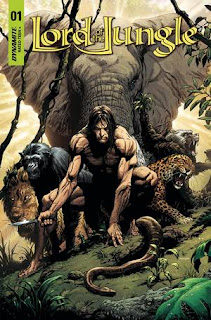 LORD OF THE JUNGLE VOLUME 3 #1
DYNAMITE ENTERTAINMENT
STORY: Dan Jurgens
ART: Benito Gallego
COLORS: Francesco Segala
LETTERS: Carlos M. Mangual
EDITOR: Matt Idelson
COVER: Gary Frank
32pp, Color, $3.99 U.S. (November 2022)
Rated Teen+
“The Bleak Zone”
Tarzan is one of the most famous fictional characters in the world.  Tarzan was an orphan and the archetypal “feral child,” and in this instance, he was raised in the African jungle by great apes.  Tarzan was born a noble, John Clayton, Lord Greystoke, but he rejected civilization and lived in the wilds of Africa as a heroic adventurer.  Tarzan was created by Edgar Rice Burroughs and first appeared in the novel, Tarzan of the Apes, which began serialization in All-Story Magazines in 1912, before it was published in book form in 1914.  Tarzan would go onto to be a multimedia star, appearing in films, on television, and in comic books.
The latest Tarzan comic book is Dynamite Entertainment's Lord of the Jungle Volume 3. It is written by Dan Jurgens; drawn by Benito Gallego; colored by Francesco Segala; and lettered by Carlos M. Mangual.  The story involves an event that occurred in the early years of Tarzan's adventures.
Lord of the Jungle Volume 3 #1 opens in the 1950s, onboard a merchant vessel just off the coast of Africa.  One of its passengers is Tarzan, Lord of the Jungle.  Staring out at the storm-tossed ocean, Tarzan's mind returns to the days before his birth, as well as to times later in life – boyhood and early adulthood.  A past wrong must be made right, no matter what manner of beast or obstacle stands in Tarzan's way.  For now, there are thieving men standing in the way of his reunion with an old friend.
THE LOWDOWN:  Since July 2021, Dynamite Entertainment's marketing department has been providing me with PDF review copies of some of their titles.  One of them is Lord of the Jungle Volume 3 #1, which is only the first issue of a solo Dynamite Tarzan comic book that I have read.
Writer Dan Jurgens has had a four-decade career in American comic books of solid work as both a writer-artist and a writer.  As a storyteller, Jurgens understands the processes of telling stories in the medium of comic books, which shows itself here.  Lord of the Jungle Volume 3 #1 reveals the familiar story of Tarzan's past with lots of teasing about the connection of his past with whatever is going to happen in this series' present.  With each page, Jurgens made me more interested in this first chapter.
Artist Benito Gallego also delivers solid work here with an alluring storytelling rhythm that encourages the readers to keep going.  It does not hurt that Gallego's drawing style resembles that of the late Joe Kubert.  Kubert's four-year stint (1972-76) as writer-artist and later as writer-only of DC Comics' Tarzan comic book series is considered by some to be among his best work.  Colorist Francesco Segala captures the varied moods of this story's settings, both in time and locale, and letterer Carlos M. Mangual brings a sense of drama with his stylish, shifting fonts.
Lord of the Jungle Volume 3 has potential.  I rarely read Tarzan comic books, but I think that I will return to this one for the second issue.
I READS YOU RECOMMENDS:  Fans of Tarzan comic books will want to read Lord of the Jungle Volume 3.
A-
Reviewed by Leroy Douresseaux a.k.a. "I Reads You"
https://twitter.com/DynamiteComics
https://www.dynamite.com/htmlfiles/
https://www.facebook.com/DynamiteComics/
https://www.youtube.com/channel/UCNOH4PEsl8dyZ2Tj7XUlY7w
https://www.linkedin.com/company/dynamite-entertainment
The text is copyright © 2022 Leroy Douresseaux. All Rights Reserved. Contact this blog or site for reprint and syndication rights and fees.
-------------------------------
Amazon wants me to inform you that the affiliate link below is a PAID AD, but I technically only get paid (eventually) if you click on the affiliate link below AND buy something(s).
Posted by Leroy Douresseaux at 2:41 PM