Comics Review: "SHEENA Queen of the Jungle Volume 2 #10" is a Final Issue Win 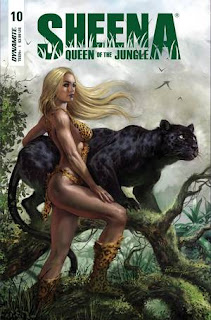 Dynamite began publishing Sheena comics in 2017.  Dynamite's second series is Sheena: Queen of the Jungle, Volume 2.  It is written by Steven E. de Souza; drawn by Jethro Morales, Wil Rio, and Ediano Silva; colored by Dinei Ribeiro; and lettered by Taylor Esposito.  Writer de Souza begins a new series of challenges for Sheena in the story line, “Cenozoic,” which finds Sheena on a mission to save a nature preserve when she and her animal and human companions stumble upon an island out of time.

Sheena: Queen of the Jungle, Volume 2 #10 opens in the year 1945.  That is where Sheena and company find themselves – lost in time on an island that recalls “Skull Island” from King Kong (1933).  Captain Karl Visser is the captain of the U-3523, a prototype “XXI” U-boat and the greatest and most powerful super-submarine of the German Kriegsmarine.  Now, Visser holds court on the island's beach, with Sheena's human companions, Bob Kellerman and Martin Ransome, his captive audience.

Visser finally believes their story that they are from the future.  Now, Visser has a date with a date:  July 23, 1945 and U.S.S. Indianapolis – and the chance to change history … in Nazi Germany's favor.

Speaking of King Kong references, Sheena is also tied up for sacrifice, ready for the “Great Maw.”  But can she escape, even with a little help from her animal friends?

THE LOWDOWN:  Since July 2021, Dynamite Entertainment's marketing department has been providing me with PDF review copies of some of their titles.  One of them is Sheena: Queen of the Jungle Volume 2 #10, which is the tenth Dynamite Sheena comic book that I have read.

Alas, Sheena: Queen of the Jungle Volume 2 is another great Dynamite Entertainment comic book series that is ending with a tenth issue.  The phrase “killed it” was made for creative teams like the ones that produced this fine series.

Dynamite's current incarnation of Sheena: Queen of the Jungle is a reboot by the prolific Hollywood multi-hyphenate, Steven E. de Souza.  He perfectly modernizes Sheena without loosing her classic “jungle girl” and pulp-inspired comic book roots.  This second five-issue story arc summons the best of the Indiana Jones sequels, Jurassic Park, and King Kong with splashes of Wonder Woman.  Under de Souza's guidance, Sheena is a great hero to follow, both smart and ruthless, the way male heroes are allowed to be.

Artist Ediano Silva saves the best for last, although his previous issues were already quite good.  His storytelling is so big and dynamic, and he captures the vileness of Capt. Visser and the conniving male locals with a subtle touch that keeps them from being stock villains.  And the pages with the dinosaur recalls classic lost world comic book artists, Al Williamson, Wallace Wood, and Mark Schultz, to name a few.

Sheena: Queen of the Jungle Volume 2 #10 is a … dynamite final issue.  This series will likely be even more exciting to read in trade collection.  In the meantime, don't wait; try to find issues #6-10 and enjoy them now.

I READS YOU RECOMMENDS:  Fans of Sheena will want to try Sheena: Queen of the Jungle Volume 2.