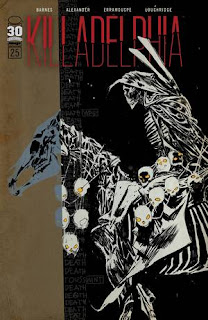 KILLADELPHIA #25
IMAGE COMICS
STORY: Rodney Barnes
LAYOUTS: Jason Shawn Alexander
PENCILS: Germán Erramouspe
INKS: Jason Shawn Alexander
COLORS: Lee Loughridge
LETTERS: Marshall Dillon
EDITOR: Greg Tumbarello
COVER: Jason Shawn Alexander
VARIANT COVER ARTIST: HC Anderson
28pp, Colors, 3.99 U.S. (November 2022)
Rated “M/ Mature”
Killadelphia created by Rodney Barnes and Jason Shawn Alexander
“There's No Place Like Home” Part I: “A Cold Place in Hell”
Killadelphia is an apocalyptic vampire and dark fantasy comic book series from writer Rodney Barnes and artist Jason Shawn Alexander.  Published by Image Comics, it centers on a conspiracy in which vampires attempt to rule Philadelphia.  Colorist Lee Loughridge and letterer Marshall Dillon complete Killadelphia's creative team.
Killadelphia focuses on James “Jim” Sangster, Jr. and his father, revered Philadelphia homicide detective, James Sangster, Sr., a vampire!  Father and son lead a ragtag team comprised of a medical examiner (Jose Padilla), werewolves, a witch, and a rebellious, but special young vampire (Tevin Thompkins a.k.a. “See Saw”) in a bid to save Philly.  Their adversary is a former First Lady, the vampire Abigail Adams.
As Killadelphia #25 (“A Cold Place in Hell”) opens, Anasi the Spider-God parlays with Corson (the demon lord who raised some … Hell in Baltimore, Maryland in Nita Hawes' Nightmare Blog).  Can Anasi save the world and therefore humanity, whose worship sustains many supernatural beings?  Does Corson give a damn?
Meanwhile,  General Toussaint Louverture and his Haitian army have been resurrected by the side of the light for one thing and one thing only: exterminate all vampires.  So what happens when one of our favorite vampires has a confrontation with him?
THE LOWDOWN:  We are at the first chapter of Killadelphia's fifth story arc, “There's No Place Like Home.”  According to the musings of creators Rodney Barnes and Jason Shawn Alexander, we, the readers, are not prepared for what was coming.
Killadelphia #25 affirms that.  I can say of Barnes and Alexander what I say about Mark Millar and his collaborators:  they not only deliver superb comic books, but they also deliver twists and turns to challenge their readers' imaginations.  One can be cynical, or one can chose to believe that they love their readers.
New pencil artist Germán Erramouspe and colorist Lee Loughridge deliver a burning spectacle of  confrontations and rumination.  I am enjoying their new contributions, but I'm still in a daze because of this issue's sudden turn of events.  And, dear readers, this first chapter is a jumping-on point, so...
NOTE: Killadelphia #25 is also available in a “Noir Edition,” featuring black-and-white line art interiors.
I READS YOU RECOMMENDS:  Fans of vampire comic books and of exceptional dark fantasy will want Killadelphia.
[This issue contains an afterword by Jason Shawn Alexander.]
A+
Reviewed by Leroy Douresseaux a.k.a. "I Reads You"
https://twitter.com/TheRodneyBarnes
https://twitter.com/jasonshawnalex
https://twitter.com/luisnct
https://twitter.com/MarshallDillon
https://twitter.com/ImageComics
https://imagecomics.com/
http://rodneybarnes.com/
https://www.instagram.com/imagecomics/
https://www.facebook.com/pages/Image-Comics-Inc/178643148813259
https://www.twitch.tv/imagecomics
https://www.youtube.com/channel/UCHmaKLo0FXWIPx-3n6qs3vQ
https://www.linkedin.com/company/image-comics/
The text is copyright © 2022 Leroy Douresseaux. All Rights Reserved. Contact this blog or site for reprint and syndication rights and fees.
------------------------
Amazon wants me to inform you that the affiliate link below is a PAID AD, but I technically only get paid (eventually) if you click on the affiliate link below AND buy something(s).
Posted by Leroy Douresseaux at 4:36 AM