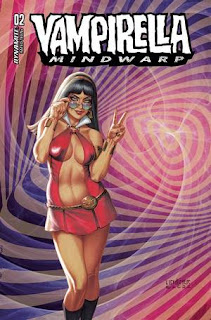 In 2010, Dynamite Entertainment obtained the character and has been publishing new Vampirella material since then.  The latest is Vampirella Mindwarp Volume 1.  This new series is written by Jeff Parker; drawn by Benjamin Dewey; colored by Dearbhla Kelly; and lettered by Jeff Eckleberry.  The series follows a mad chase across time and space, as an aged sorceress tries to steal and inhabit Vampirella's body.

Vampirella Mindwarp Volume 1 #2 (1969!) opens in the wake of the Baroness Gruzal's attempt to possess Vampirella's body.  With the help of Ren Darton, who once worked for the baroness, Vampirella makes a bid to stop the transference, and that does two things.  First, in the present, it breaks “the Crown of Karu-Hardas of Sumeria,” the relic that the baroness was using to initiate the rite that would put her mind inside Vampirella's body.

Secondly, Vampirella's ploy transports her mind to into the body of Vampirella of 1969!  And Ren's mind is now in the body of an older Pendragon the Great, a popular magician of the 1930s and Vampirella's friend.  This particular year also marks the first meeting of Vampirella and Baroness Gruzal.  It is a deadlier time, and Baron Gruzal is still alive, as are demons with an obsessive taste for a particular vampire.

THE LOWDOWN:  Since July 2021, Dynamite Entertainment's marketing department has been providing me with PDF review copies of some of their titles.  One of them is Vampirella Mindwarp Volume 1 #2, which is one of many Dynamite Vampirella comic books I have read.

Vampirella Mindwarp #1 surprised me.  I was really crazy about it, and I wondered if writer Jeff Parker (a writer whose work I like) could deliver a really good second issue.  He does, as he makes the most of Vampirella's sidekick, Ren Darton.  Ren adds some depth of character to the series and allows for Vampirella to be more free-wheeling.  Parker also offers an intriguing collection of occult villains and wackos and some spicy demons.

Benjamin Dewey's art is still pretty and his storytelling is clean, straight-forward and conveys the story in a dynamic manner.  Dearbhla Kelly's colors continue to make the art pop, and Jeff Eckleberry's letters capture the crazy rhythm of this story.

Vampirella: Mindwarp #2 is a good second issue, and it has an ending that will make me return for more.  You should, also, dear readers.

I READS YOU RECOMMENDS:  Fans of Vampirella comics will want to read Vampirella Mindwarp Volume 1.

Posted by Leroy Douresseaux at 1:57 PM