Comics Review: "Scooby-Doo, Where Are You? #118" Goes to the Movies 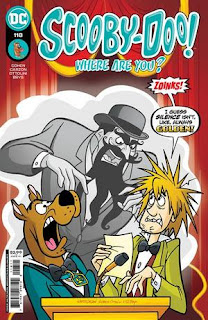 SCOOBY-DOO, WHERE ARE YOU? (2010) #118
DC COMICS
STORY: Ivan Cohen; Sholly Fisch
PENCILS: Walter Corzan; Scott Neely
INKS: Horacio Ottolini; Scott Neely
COLORS: Silvana Brys; Jason Lewis
LETTERS: Saida Temofonte
EDITORS: Courtney Jordan; Alex Antone (reprint)
COVER: Walter Corzan and Silvana Brys
32pp, Color, $2.99 U.S. (December 2022)
Ages 8+
“And the Winner Isn't...”
Welcome, dear readers, to my continuing journey through the Scooby-Doo, Where Are You? comic book series, which began publication in 2010.  I continue to renew my subscription so that I can continue to review this series for you, dear readers.
Scooby-Doo, Where Are You? #118 opens with “And the Winner Isn't...,” which is written by Ivan Cohen and drawn by Walter Carzon and Horacio Ottolini.  The story finds Mystery Inc.:  Scooby-Doo, Shaggy, Fred, Daphne, and Velma … making a silent film?!  Actually, the gang is helping film a promotional short for the upcoming “Movie Awards.”  However, a ghost, calling itself the “Silent Phantom” is determined to ruin the show.
The second story, “Dial 'E' for Eeeeeeeeek!” is, as usual, a reprint story and is written by Sholly Fisch and drawn by Scott Neely.  [This story was originally published in Scooby-Doo, Where Are You? #32 (cover date: June 2013).]  The story finds Mystery Inc. invited to the studios of notorious film director, Alfred Hatchplot.
He is known for his scary movies that make audience jumpy, but now, he claims that something is making him jumpy.  It seems that Hatchplot is being haunted by the menaces from his filmograpy, including the dark birds from his film, “The Annoying Birds.”  Can Scooby and the gang solve this case before these menaces start targeting them?
Scooby-Doo, Where Are You? #118 is a nice movie-themed issue.  The opening story “And the Winner Isn't...” is produced by one of my favorite Scooby-Doo comic book creative teams, but it is actually not a winner.  However, it does have an unusual ending regarding the villain, one that I don't recall ever seeing in a Scooby-Doo comic book, TV series, or film.
“Dial 'E' for Eeeeeeeeek!” is a nice spoof of Alfred Hitchcock and his films.  Alfred Hatchplot is a rather tame take on Hitchcock, who supposedly could be quiet a tyrant on his film sets.  The shower scene in Psycho, which is arguably Hitchcock's most famous film, gets a nice send-up as a movie entitled “Whacko.”  Shaggy and Scooby even take a spin around Psycho's infamous shower scene with a bathtub scene of their own.
Scooby-Doo, Where Are You? #118 is an improvement over issue #117, which would have been a disaster if the reprint story had not saved the new story.  So grab your popcorn and “Scooby Snacks” and read issue #118 or maybe watch a Scooby-Doo movie.  And until next time, Scooby-Dooby-Doo!
B
[This comic book includes a seven-page preview of the DC Comics original graphic novel, “Green Lantern: Alliance” by Minh Lê and Andie Tong.]
Reviewed by Leroy Douresseaux a.k.a. "I Reads You"
https://www.dccomics.com/
https://twitter.com/DCComics
https://www.facebook.com/dccomics
https://www.youtube.com/user/DCEntertainmentTV
https://www.pinterest.com/dccomics/
https://www.periscope.tv/DCComics/1ZkKzezXwZdxv
The text is copyright © 2022 Leroy Douresseaux. All Rights Reserved. Contact this blog or site for syndication rights and fees.
------------------------
Amazon wants me to inform you that the affiliate link below is a PAID AD, but I technically only get paid (eventually) if you click on the affiliate link below AND buy something(s).
Posted by Leroy Douresseaux at 5:20 PM