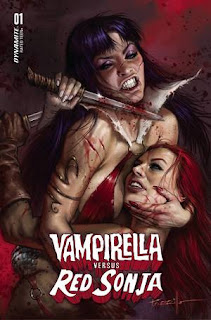 VAMPIRELLA VERSUS RED SONJA VOLUME 2 #1
DYNAMITE ENTERTAINMENT
STORY: Dan Abnett
ART: Alessandro Ranaldi
COLORS: Ellie Wright
LETTERS: Jeff Eckleberry
EDITOR: Nate Cosby
COVER: Lucio Parrillo
32pp, Color, $3.99 U.S. (November 2022)
Rated Teen+
Vampirella is a vampire and female superhero created by the late author and science fiction and horror expert, Forrest J Ackerman, and designed by comic book artist, Trina Robbins.  Vampirella first appeared in Vampirella #1 (Sept. 1969), the debut issue of a black and white horror comics magazine from Warren Publishing.  Writer-editor Archie Goodwin changed the character from a hostess of horror comics to a leading character in her own stories.
Red Sonja is a fantasy (sword and sorcery) comic book character that debuted in Marvel Comics' Conan the Barbarian #23 (cover dated: February 1973).  Created by writer Roy Thomas and artist Barry Windsor-Smith, Red Sonja was loosely based on “Red Sonya of Rogatino,” a female character that appeared in the 1934 short story, “The Shadow of the Vulture,” written by Robert E. Howard (1906-1936), the creator of the character, Conan the Cimmerian.
Now, once again, American comics' two most Dynamite ho's are in a team-up comic book, Vampirella Versus Red Sonja Volume 2.  It is written by Dan Abnett; drawn by Alessandro Ranaldi; colored by Ellie Wright; and lettered by Jeff Eckleberry.  The new series finds Vampirella and Red Sonja involved with a cosmic collection of superheroes sworn to protect all known universes.
Vampirella Versus Red Sonja Volume 2 #1 opens in “Project HQ.”  These are the headquarters of the “The Project,”a cosmic collection of superheroes sworn to protect all known universes.  And Taja Iridessa Henson a.k.a. “Dyna Might” is the newest member.
Dyna Might discovers that her first day is perhaps the worst day ever for The Project.  Earth Plural World 6337 has been shut off from the other Plural Worlds.  Something terrible has attacked it, and that attack has stumped The Project's greatest minds.  But there is one quasi-member who may have the answers.  It's Vampirella of Plural World 2709, whom none of the other superheroes trust because they consider her to be a “daemon.”  Can Red Sonja of Plural World 0666 get something out of Vampirella?  And where does Dyna Might fit in this?
THE LOWDOWN:  Since July 2021, Dynamite Entertainment's marketing department has been providing me with PDF review copies of some of their titles.  One of them is Vampirella Versus Red Sonja Volume 2 #1, one of many, many Vampirella or Red Sonja comic books I have read.
Judging by this first issue, Vampirella Versus Red Sonja Volume 2 has potential.  First, it is written by Dan Abnett, a writer of inventive and imaginative comic books.  As expected, he has filled Vampirella Versus Red Sonja Volume 2 #1, interesting concepts if not equally interesting superheroes.  Outside of Vampirella, Red Sonja, and Dyna Might, the rest of these heroes are strictly Dullsville.  Honestly, I don't give a crap about them, but I hope that changes.
The art by Alessandro Ranaldi is stylistically uninspiring, but the storytelling is good.  Ellie Wright's coloring is muddy, and Jeff Eckleberry's lettering is over-the-top.  Comics are a graphical storytelling medium, and here, the graphics lack a spark.  I hope that changes because I think Vampirella Versus Red Sonja Volume 2 has the potential to explode.
I READS YOU RECOMMENDS:  Fans of Vampirella and/or Red Sonja will want to read Vampirella Versus Red Sonja Volume 2.
B
Reviewed by Leroy Douresseaux a.k.a. "I Reads You"
https://twitter.com/DynamiteComics
https://www.dynamite.com/htmlfiles/
https://www.facebook.com/DynamiteComics/
https://www.youtube.com/channel/UCNOH4PEsl8dyZ2Tj7XUlY7w
https://www.linkedin.com/company/dynamite-entertainment
The text is copyright © 2022 Leroy Douresseaux. All Rights Reserved. Contact this blog or site for reprint and syndication rights and fees.
------------------------
Amazon wants me to inform you that the affiliate link below is a PAID AD, but I technically only get paid (eventually) if you click on the affiliate link below AND buy something(s).
Posted by Leroy Douresseaux at 2:29 PM