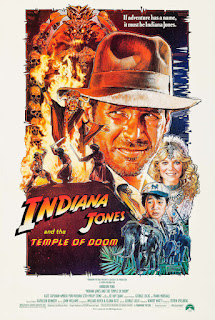 Indiana Jones and the Temple of Doom is a 1984 action-adventure film from director Steven Spielberg.  It is the second entry in the “Indiana Jones” film franchise that began with the 1981 film, Raiders of the Lost Ark (1981), but it is also a prequel to Raiders.  In the Temple of Doom, Indiana Jones takes on a secret cult in India in order to reclaim a sacred rock stolen from a simple Indian village.

Indiana Jones and the Temple of Doom opens in Shanghai, 1935.  Dr. Henry “Indiana” Jones, Jr. a.k.a. “Indy” (Harrison Ford) has been hired by Lao Che (Roy Chiao), a Shanghai crime boss, to find the remains of Emperor Nurhaci.  Che betrays Indy, who goes on the run with Willie Scott (Kate Capshaw), one of Che's nightclub singers, and Short Round (Ke Huy Quan), a young Chinese orphan who is Indy's sidekick.

After surviving a plane crash orchestrated by Lao Che, the trio ends up in a small village in northern India.  The village chieftain (D. R. Nanayakkara) believes that Indy's arrival is fated, and that he will help the village with two problems.  The first is to retrieve the village's stolen “Shivalinga,” a rock the villagers hold in high esteem.  Indy believes that this rock is one of the five sacred “Sankara stones.”  The chieftain also wants Indy to find the villagers' missing children.  The chieftain informs Indy that the village's troubles began when the new Maharajá reopened the Pankot Palace in Pankot, an opening that has brought back a “dark light” to the land.

Traveling to Pankot Palace, Indy, Willie, and Short Round discover that the Maharajá of Pankot (Raj Singh) is a child, and beneath his palace, the ancient “Thuggee” cult has also been revived.  The cult leader, Mola Ram (Amrish Puri), wants to find all five Sankara stones in order to gain power from the Thuggees' goddess, Kali.  Now, Indiana Jones has taken it upon himself to stop the cult.

For years, I encountered pretentious film fans who despised Indiana Jones and the Temple of Doom and who insisted that I should hate it, too.  However, I have always found Temple of Doom to be endlessly entertaining, but I also understand that it has a lot to live up to.  It is the sequel (prequel) to one of the most popular movies of all time and one of the greatest films of all time (as far as I'm concerned), Raiders of the Lost Ark.

Indiana Jones and the Temple of Doom also remains the most unique film in the series.  To date, it is the only entry that does not have a single moment set in the United States.  Set in China and India, it is the only film in the series in which the main cast is largely non-white.  The film has an intriguing villain to open the story, the Shanghai crime boss, Lao Che, and a superb main villain, Mola Ram, the Thuggee cult leader.  Both actors play their respective villainous roles quite well.

Indiana Jones and the Temple of Doom is also the first film in the series to suggest that Indy has a network of helpers or at least a circle of associates.  For me, Short Round is an excellent sidekick, and he fits better than Kate Capshaw's Willie Scott, who seems like nothing more than a noisy dame.

Indiana Jones and the Temple of Doom also has excellent production values, especially its costumes, hair and make-up, and art direction and sets.  The film won an Oscar for its visual effects, which remain impressive four decades later, especially for the scenes involving the lava pit and the chase through the mine's tunnel system.

I am watching and, in some cases, re-watching early Steven Spielberg films, such as Duel, Jaws, and 1941, in anticipation of Spielberg's autobiographical film, The Fabelmans.  I have lost track of how many times I have watched at least part of Indiana Jones and the Temple of Doom, but this is the first time that I have watched the film in its entirety in decades.  Watching it again, I am sure now, more than ever, that I love this film.  Indiana Jones and the Temple of Doom was the first sequel to Raiders of the Lost Ark, and to date, it remains the best.

Posted by Leroy Douresseaux at 3:01 PM