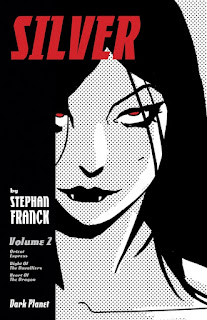 A direct extension of Bram Stoker’s Dracula, and told as a classic heist story, SILVER astonishes as both a faithful homage and an exciting reinvention, staying true to its literary origin while creating its own expansive and wildly original mythology.  “I have a deep fascination with the original Stoker novel,” says Franck, “and kept wanting to lift the veil and see more of that world… What happens once the Victorian strictures disappear and the 20th century sets in? What happens to the characters and their descendants? What is that world’s history--going all the way back to the Bronze Age, with epic tales otherwise lost to the sands of time?” As we follow the team from pulp-era New York City, across Europe, and to their final destination, we enter the hidden world of vampires--a culture of intrigues, vanity, decadence and ancient traditions. Franck says: “I couldn’t wait to present my take on the legendary castle and to reveal my version of Dracula. A damaged character in search of himself. Not as dead as we thought he was. And his spirit definitely not as freed.”

Such a character and his world provide a great thematic foil for Finnigan and his group of con-men. Franck says: “Conmen and vampires are related in the sense that they both are predatory creatures, who don’t engage with life in the way most people do. So taking a bunch of broken characters with bruised souls, and pitting them against the truly soulless, leads to the idea that walking around in the world and feeling truly alive are two completely different things.”

As SILVER volume 2 puts its long con in motion, it sets Finigan and the king of the undead on a collision course. Franck says:  “I always saw Finnigan as a good guy trying to be bad, and this Dracula is a bad guy trying to be good, which means that they will meet at an interesting crossroads.”

This new volume continues the series trademark character work as Hamilton, Tao, Finnigan and Sledge further build their relationships, revealing more about their past and inner lives, in a powerful combination of light-hearted, suspenseful, and emotional moments. Meanwhile, new characters appear on the scene, including the particularly cruel and fearless vampire princess Lillian, with whom Sledge seems to have a secret history.

As with previous installments in the series, comic books luminaries have been vocal supporters of Franck’s storytelling:

“With SILVER, Stephan Franck masterfully drives his narrative home. A breath of fresh air in the world of comics!” --TOMMY LEE EDWARDS (Marvel 1985, The Question, Turf)

“Why was I not reading this before?  Why? Why? Why?  It’s everything I love about comics.  And everything I miss about a lot of comics these days.” — JIM KRUEGER (Earth X, Justice, The Runner)


ABOUT THE AUTHOR:
Stephan Franck is an award-nominated animator/writer/director/comic book creator. He was a supervising animator on the cult classic THE IRON GIANT, and contributed story to DESPICABLE ME. He co-created the animated TV series CORNEIL & BERNIE (Nicktoons - Hub Network), and received an Annie Award nomination for Best Director In a TV Program for the special SMURFS: THE LEGEND OF SMURFY HOLLOW, which presented the Smurf for the first time in 2D animation at a feature-animation level of quality. Stephan’s graphic novel debut, SILVER Volume 1 earned him a nomination for the prestigious Russ Manning Award at San Diego Comic Con 2014, a 2015 Geekie Awards nomination for Best Comic or Graphic Novel, and landed on ComiXology Submit’s ESSENTIAL READS list.