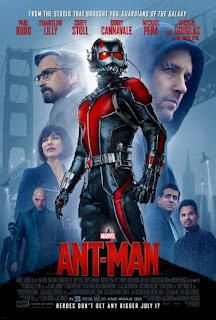 Ant-Man is a 2015 superhero film and sci-fi action-comedy film directed by Peyton Reed and produced by Marvel Studios.  The film focuses on the Marvel Comics character, Ant-Man, who first appeared in Tales to Astonish #27 (cover date: September 1962) and was created by Stan Lee, Larry Lieber, and Jack Kirby.  Ant-Man the movie focuses on an ex-con who is given a super-suit that shrinks the wearer to microscopic size while increasing the wearer's strength, so that he can use it to pull off a heist that will save the world.

Ant-Man opens in the year 1989.  Scientist Hank Pym (Michael Douglas) discovers that his colleagues at S.H.I.E.L.D. are attempting to duplicate his shrinking technology, which he calls the “Pym particle,” so he quits.  Pym once used that shrinking tech to power his “Ant-Man” suit.  In the present day, the now-retired Pym discovers that his protégé at Pym Technologies, Darren Cross (Corey Stoll), is also trying to duplicate the “Pym particle.”  In fact, Cross is very close to doing so and has even built his own shrinking suit, which he calls “Yellowjacket.”

Pym and his estranged daughter, Hope van Dyne (Evangeline Lilly), believe that the only way to stop Cross is to steal the “Yellowjacket” suit and all of Cross' data and research.  To do that, they will have to break into the heavily-secured Pym Technologies building, and that means someone will have to wear the Ant-Man suit.  Is down-on-his-luck ex-con and master thief, Scott Lang (Paul Rudd), the perfect person to be the new Ant-Man?

As Marvel's superheroes go, Ant-Man is D-list, as far as familiarity with the public is concerned.  To bring him to the big screen, Marvel needed the right actor.  Paul Rudd is the right actor; he is irresistibly likable.  I have been a fan of his since I first saw him in Clueless about two decades ago.  His affable charm sells the idea of Scott Lang as a well-meaning criminal with a just cause.  If you find Ant-Man to be a silly concept, Rudd makes it all seem less so.  Everything about him says just-right.

Meanwhile, the rest of the cast is pretty good.  Corey Stall, who has been giving dramatic heft to FX's summer vampire television series, “The Strain,” since 2014, is Marvel's best villain-of-the-first-movie since Jeff Bridges menaced the first Iron Man film.  Michael Peña as Luis, Scott's friend, is good, although the character sometimes seems a bit like an out-of-place oddity.  Evangeline Lilly is lost in make-up as Hope van Dyne, who is also an oddity in this film.

I guess “odd” is the theme for Ant-Man the movie.  I can't believe how much I like this movie.  I saw Ant-Man at an early matinee on a Friday afternoon.  There were a few children in the audience, and they loved the movie, often squealing with delight.  I was dignified enough to force my squeals into hearty laughs.

Of all the Marvel Studios films, Ant-Man is the one that most effectively uses the avalanche of CGI and special effects we have come to expect of modern summer blockbusters, fantasy films, and superhero movies.  I would dare say that just about every use of computer-generated imagery and effects in Ant-Man is in context, serving the narrative.  Ant-Man is like The Matrix (at least the first one) in that all of the movie and computer magic is justified.  I want a sequel, so I'm asking the rest of the world to join me in loving ants and Ant-Man as you never thought you could or would.


The text is copyright © 2015 Leroy Douresseaux. All Rights Reserved. Contact this site for reprint syndication rights and fees.