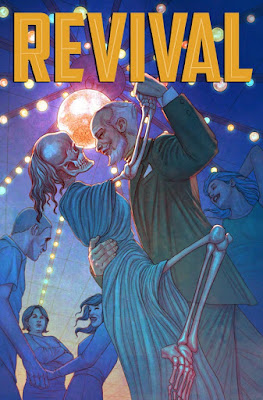 Issue #36 is a stand-alone before the new arc begins

Previously in REVIVAL, the rural town of Wausau, Wisconsin was rocked by a vicious attack on its county courthouse, and Dana fought to protect Em from the scarred assassin Black Deer—casting a harsh light on the goings-on at The Farm in the process.

In REVIVAL #36, 98-year-old fitness guru Lester Majak reassesses what it means to live forever in a city full of the undead.

“Issue #36 focuses on one man's experience in Wausau, in the new status quo set up after issue #35,” said Seeley. “It's a bittersweet story about living with death when that doesn't mean what it used to.”