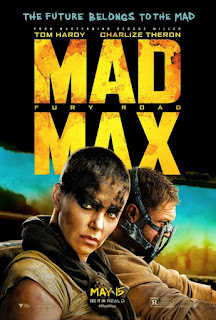 Mad Max: Fury Road is a 2015 post-apocalyptic action film from director George Miller.  Written by Miller, Brendan McCarthy, and Nico Lathouris, Fury Road is the fourth film in the Mad Max film franchise, which began with the 1979 Australian film, Mad Max.  Actor Tom Hardy replaces actor Mel Gibson as the title character; Gibson portrayed Max in the franchise's first three movies.  Mad Max: Fury Road follows a warrior who escapes with a group of female prisoners and takes them on a search for her homeland, with the aid of a drifter named Max.

Mad Max: Fury Road is set some years after a nuclear holocaust has left civilization collapsed and the world a desert wasteland.  One oasis is The Citadel, which is ruled over by the tyrannical Immortan Joe (Hugh Keays-Byrne), who has an army of “War Boys” to carry out his orders.  Early in the story, Joe sends one of his lieutenants, Imperator Furiosa (Charlize Theron), in an armored truck to collect gasoline.  After she goes off-route, Joe realizes that Furiosa has escaped with his five wives:  Angharad (Rosie Huntington-Whiteley), Capable (Riley Keough), Cheedo (Courtney Eaton), The Dag (Abbey Lee), and Toast (Zoë Kravitz).

Immortan Joe leads his entire army in pursuit of Furiosa and her armored truck, a “war rig.”  A sick War Boy named, Nux (Nicholas Hoult), seeks to make his name stopping Furiosa.  But the fate of Furiosa and her fellow escapees may rest in the hands of a drifter recently caught by the War Boys, the former “Road Warrior,” Max Rockatansky (Tom Hardy).

If Mad Max: Fury Road is not the best genre film of the year, it is one of the best and sits near the top.  Compared to its summer action movie competitors, Fury Road features relatively little use of CGI and other computer-generated special effects.  What is even more surprising is that the hero of Fury Road is really a female character, Charlize Theron's Imperator Furiosa.  Tom Hardy's Max is, at best, a partner, if not a kind of sidekick.

The Furiosa-Max dynamic allows Miller and his co-writers to drive this film with themes of survival and redemption, rather than with male-centered, goal-oriented themes like revenge or the pursuit of something (like gas and guns).  Thus, Fury Road seems more hopeful than the other films in this franchise, which were about the desperation to survive.  In fact, this film's thoughtful approach to both character and to the drama of the big “Fury Road” chase, allows even an ostensible villain, Nux the War Boy, to have an arc of redemption.

I could talk more about the performances, the characters, and the drama, which are all good, but I would rather talk about the action.  Mad Max: Fury Road is a whirling dervish of action sequences and scenes.  I see, at least, a best editing Oscar nomination in Fury Road's future, and some love from whatever awards that are given for the men and women who perform stunt work in movies.  The road races and vehicle pursuits surpass even the amazing chases in 1981's Mad Max 2 (known as The Road Warrior for its 1982 U.S. release).  The action is so good that it makes Fury Road seem like one long action scene, which it most certainly is not.

Mad Max: Fury Road is one of those films that has to be seen to be believed.  I don't think I can convey in a review how awesome an action movie it is and how surprisingly good a post-apocalyptic drama it also is.  Director George Miller proves once and for all that he is one of the great film directors and that he only gets better with age.

Posted by Leroy Douresseaux at 6:24 AM