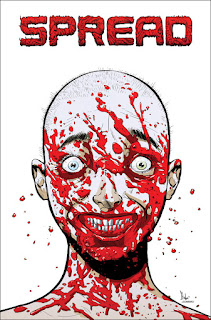 Issue #12 is a standalone issue, featuring art by Jen Hickman

Previously in SPREAD, a man named No found an orphaned baby named Hope. Hope is the key to stopping The Spread—the gruesome cancerous growth of monsters that’s brought civilization to a grinding halt—but not everyone sees her as a savior. The key to keeping Hope alive has been Molly, a crazy survivor with an unknown background.

“The world of Spread is a bad one, and Molly's story reflects this,” said Jordan. “This was probably one of the hardest scripts I ever wrote, and I really hope I did justice to the story.”

“When Justin sent me the script for the issue, he noted that this one was ‘fairly brutal’ and that made me pause. If Justin Jordan, of all people, wanted to preface a script like that, what exactly was lurking in the pages?” said Hickman. “I mean you'll have to read for yourself, but he was spot on. This issue cuts deep. I was like 3/4 through the issue and about 30 seconds from crying. I hope that I've succeeded in imparting even a fraction of the ‘fairly brutal’ emotion in the script. Basically, I hope you cry. Read Spread. It's super awesome.”