Review: "Da Sweet Blood of Jesus" is Strange and Beautiful 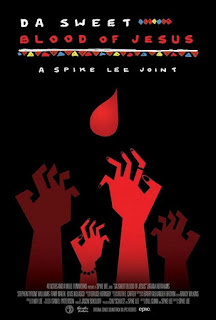 FANTASY with elements of drama and romance

Da Sweet Blood of Jesus is a 2014 African-American vampire drama and romance from director Spike Lee.  Lee financed the film using the crowdfunding platform, Kickstarter.  A number of fellow filmmakers and celebrities gave money to Lee's crowdfunding campaign, and each of their contributions was large enough ($10,000, I think) to earn a film credit as an “associate producer.”  Some these associate producers include Oscar-winning director, Steven Soderbergh; owner of the NBA's Dallas Mavericks, Mark Cuban; NBA star, Joakim Noah; and CNN's Soledad O'Brien, among others.  The film was released to select theaters and VOD (video-on-demand) by Gravitas Ventures.

Da Sweet Blood of Jesus is an unofficial remake and homage to Bill Gunn's 1973 film, Ganja and Hess.  Lee's film focuses on a wealthy anthropologist who becomes a vampire after being stabbed to death with an ancient African dagger.

Da Sweet Blood of Jesus introduces Dr. Hess Greene (Stephen Tyrone Williams), a wealthy, young African-American anthropologist.  A collector of African art and artifacts, Hess has recently acquired a mysterious dagger originating in the ancient Ashanti Empire.  Hess shares his find with Lafayette Hightower (Elvis Nolasco), a colleague from the Museum of the Republic of Brooklyn.

After a brutal confrontation, Hess discovers that his body is invulnerable to physical harm, and that he also has an insatiable need for blood.  However, the manner in which he must satisfy his thirst is complicated and messy.  When Hightower's estranged wife, Ganja (Zaraah Abrahams), comes looking for her husband, Hess believes that he has found someone with whom to share his new life.

Lee sometimes has a problem unifying the messages and themes he presents in his films in a way that forms a coherent whole.  Lee has described this film as being about humans that are addicted to love and as being a new kind of love story.  Da Sweet Blood of Jesus offers themes of addiction, of HIV/AIDS, and of violence against women.  At one point in the film, Hess tells Ganja that people can be addicted to anything.  However, Hess' vampirism seems like a metaphor for addiction to crack, and his violence acts of women spread his affliction as if were spreading HIV/AIDS.

On the other hand, maybe Da Sweet Blood of Jesus is mostly Lee's tribute to the late Bill Gunn and his film, Ganja and Hess.  I have not seen that movie (and don't plan to), but Lee reportedly reproduces certain sections of the 1973 film shot-for-shot in Da Sweet Blood of Jesus.  If this is true, it would be fitting.  The misunderstood Spike Lee toasting another, perhaps misunderstood filmmaker.

Whatever the case, this unconventional, stubborn, obtuse movie impressed me.  I am always looking for a fresh take on vampires, and this detached, but gruesome, not-quite-a-fantasy film is bloody refreshing.  Also, fans of Lee's film, Red Hook Summer, will find that it is connected to Da Sweet Blood of Jesus via the Lil’ Peace of Heaven Church.

Da Sweet Blood of Jesus has a lovely piano score by Bruce Hornsby and an invigorating and imaginative soundtrack featuring songs mostly performed by recording artists who are unsigned to major record labels or by music corporations.  One can enjoy this film's opening credit sequence in which dancer, Charles “Lil Buck” Riley, dances to the opening strains of Hornsby's lovely score.  The use of music in Da Sweet Blood of Jesus is indeed sweet.