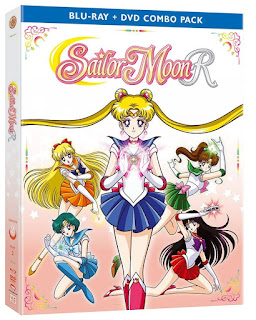 Second Season Of The Legendary Anime Series Continues In Episodes 69-89, Set For Release This Month As A Blu-ray/DVD Combo Pack And Standard Edition DVD Set

The latest set features the exciting second-half of Season 2 of the legendary anime series and will be released as a Blu-ray/DVD Combo Pack and also as a Standard DVD edition. Fans can expand their SAILOR MOON home media collections with 21 uncut episodes with many never-before-seen extras. Uncut English dubbed as well as Japanese subtitled dialogue options are available on both formats. SAILOR MOON R is rated "TV-PG.”

In the second-half of Season 2, after unexpected guest Chibi-Usa falls from the sky and tries to claim the Silver Crystal as her own, Usagi quickly learns this cheeky little pink-haired girl is the least of her problems. The Black Moon Clan, in their unending quest to destroy Crystal Tokyo and change the future, have come back in time to corrupt present day Tokyo! Together the Guardians fight the Black Moon's dark forces, but struggle to understand the truth behind their sinister plan. Is there anyone the Sailor Guardians can turn to for answers? That pink-haired girl may hold the key to Sailor Moon's victory after all!

The legendary SAILOR MOON anime series depicts the adventures of Usagi Tsukino, a cheerful 14-year-old schoolgirl who often finds herself in unwanted trouble. One day, she saves a talking cat named Luna from some mean kids, and her life is changed forever. Luna gives Usagi a magic brooch that transforms her into Sailor Moon, guardian of love and justice! Now Usagi must work with Luna to find the other Sailor Guardians and the Moon Princess, whose Legendary Silver Crystal is Earth’s only hope against the dark forces of the evil Queen Beryl!

The SAILOR MOON anime series is inspired by the bestselling manga (graphic novel) series created by Naoko Takeuchi (published in North America by Kodansha). In the series, Usagi Tsukino is a clumsy but kindhearted teenage girl who transforms into the powerful guardian of love and justice, Sailor Moon. Meeting allies along the way who share similar fates, Usagi and her team of planetary Sailor Guardians fight to protect the universe from forces of evil and total annihilation!