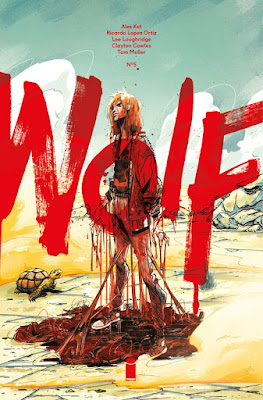 Previously in WOLF, Antoine Wolfe got us rolling on the road to hell and back when he and the teenaged maybe-Antichrist Anita kicked off what might just be the Apocalypse.

In WOLF #5, Anita and Wolfe try to pick up the pieces—five years later.

"WOLF #5 begins 4 years after the events of the first collection, and everything in the comic reflects that—down to the creative team. While Matt Taylor is still in charge of all the collected edition covers together with our designer, Tom Muller, the monthly artist torch has been passed to Ricardo Lopez Ortiz, a fantastic new talent whose qualities far outweigh his still modest comics credentials,” said Kot. “Wolfe wakes up in a prison that will seem familiar to careful readers—while Anita drags something dead back home. A home that features more than one character you may have assumed gone forever… but in comics, as in life, unexpected resurrections sometimes happen when you're looking the other way—or when you're waiting for a new issue."

“As tough as it is to fill in the giant art shoes that Matt Taylor left behind, I'm incredibly excited to take over on art duties for this new arc of Wolf,” said Ortiz. “The whole creative team has come together beautifully and concocted an eerily fun and mind-bending trip of a story that will knock readers for a loop and leave them hungry for more.”