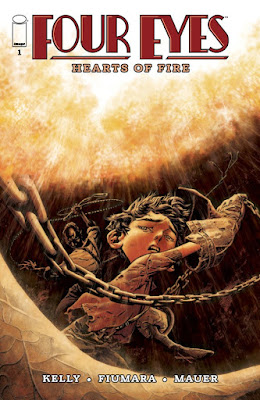 Writer Joe Kelly (I KILL GIANTS, BAD DOG) and artist Max Fiumara will launch a new story arc in their genre-splicing series FOUR EYES from Man of Action this January 2016.

Previously in FOUR EYES, readers met Enrico, a young boy in an alternate 1930’s New York. The untimely passing of his father left him the man of the house, a duty he took quite seriously—seriously enough to step into his father’s shoes as a dragon hunter. But though he tried to be a killer, he ended up bringing home a baby dragon.

In FOUR EYES: HEARTS OF FIRE #1, the training begins.

“Now that we've set up the players, Max and I really get to dive into the universe and the characters,” said Kelly. “In the first story arc, we fell in love with Enrico and the gothic world he's inhabiting. In Hearts of Fire, we start to see just what effect this world of underground fighting, gangsters, and monsters has on a young boy. This is the beginning of a dark ride for Enrico, Four Eyes and Fawkes...my favorite kind.”

ABOUT MAN OF ACTION ENTERTAINMENT
Man of Action Entertainment, the bi-coastal creative studio and writers' collective, started in 2000, created the meg-hit Ben 10, a $4.5 billion dollar boys' action empire that has been called the most successful superhero launch of the past decade, and Generator Rex, both for Cartoon Network. Man of Action Entertainment consists of creators and acclaimed comic book writers Joe Casey, Joe Kelly, Duncan Rouleau and Steven T. Seagle, having collectively worked on the largest franchise characters in comics from Superman to X-Men before refocusing on creating worlds and characters for their own original work published through their Man of Action imprint at Image Comics. Man of Action returns to serve as Executive Producers on a new Ben 10 animated series for Cartoon Network and Dentsu handpicked Man of Action Entertainment to create, write and executive produce the all-new Mega Man animated series. Man of Action served as co-Executive Producer and writer for Marvel's Ultimate Spider-Man and is currently an executive producer/writer for Marvel's Avengers Assemble on Disney XD. Beyond the world of animation, Man of Action has created wildly successful video games, toy lines, comic books, stage productions, as well as forthcoming feature films and live action television shows, most based on their own original comic book series and graphic novels.

Disney/Marvel's Academy Award®-winning feature Big Hero 6 utilized the characters and team created by Man of Action, as credited in the film's main titles. The film marked both the first time Disney turned Marvel comic book characters into an animated film and the first film based on comic book I.P. to win an Academy Award®. Upcoming projects based upon Man of Action creations include The Great Unknown, KAFKA, Officer Downe, I Kill Giants and The Crusades with Man of Action producing them and in most cases, the individual Man of Action also wrote the screenplay adaptation of their original creator-owned work. Officer Downe has wrapped production and I Kill Giants and The Great Unknown are in pre-production as feature films.