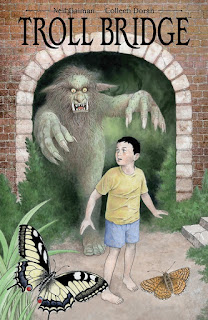 Based on a story originally published in Gaiman’s Smoke and Mirrors: Short Fictions and Illusions, Troll Bridge is a tragic coming-of-age fantasy masterpiece. The artwork of the inimitable Colleen Doran makes this book a gorgeous new addition to your Gaiman library.

“She showed me an unusual style that isn’t like classic comics. Her pencils are wonderful, layered full-color drawings. They’re subversive, more like children’s book illustrations from 50 years ago,” said Neil Gaiman in an exclusive interview with Publishers Weekly.

Troll Bridge tells the story of Jack, a young boy whose world was full of ghosts and ghouls, one of which—a ravenous and hideous troll—would haunt him long into manhood. As the beast sups upon a lifetime of Jack’s fear and regret, Jack must find the courage within himself to face the fiend once and for all.

Look for new hardcover editions of Gaiman’s Creatures of the Night and The Facts in the Case of the Departure of Miss Finch in 2016!


About Neil Gaiman
Neil Gaiman is the #1 New York Times bestselling author of more than twenty books, and is the recipient of numerous literary honors. Originally from England, he now lives in America.

About Colleen Doran
Colleen Doran is a cartoonist/illustrator whose most recent work can be seen in The New York Times  bestseller "Amazing Fantastic Incredible Stan Lee". Her work has also appeared in "Sandman" by Neil Gaiman.

She was Artist in Residence at the Smithsonian Institution, and lectured at The Maryland Institute College of Art and Design, The Australian Society of Authors, and has exhibited and lectured in galleries, museums and exhibits around the world. Books featuring her work have received the Eisner Award, The International Horror Guild Award, and the Harvey Award.