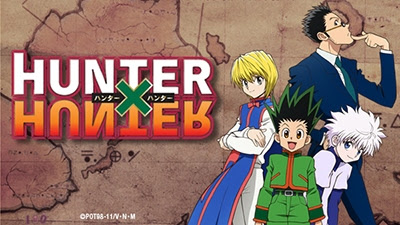 This month audiences are invited to catch the exciting streaming premiere of the supernatural action adventure, HUNTER X HUNTER. Season 1, Episodes 1-13 are available to stream in their entirety now and feature new subtitles that are true to VIZ Media’s original translations of the manga series by Yoshihiro Togashi. In HUNTER X HUNTER, Gon is a young boy who dreams of following in his father’s footsteps to become a Hunter. But first he must pass the notoriously difficult and dangerous Hunter Qualification Exam. Throughout his journey, Gon overcomes many obstacles, while making new friends along the way!

The saga of seven kings and their clansmen reaches a powerful conclusion with the final episodes (Episodes 10-13) of Season 2 of the psychological anime action drama, K: RETURN OF KINGS.

SAILOR MOON CRYSTAL has captivated anime fans and the series continues this month with the English dubbed premiere of Episodes 4-7 of the Dark Kingdom Arc with one new episode added every Friday. New dubbed episodes from the classic SAILOR MOON anime series will continue to debut every Monday throughout December. The classic anime also continues with SAILOR MOON SUPER S (Season 4) Episodes 164-166 set to premiere ahead of the start of the streaming premiere of the never before seen in North America SAILOR MOON SAILOR STARS (Season 5) on Monday, December 14th with Episode 167.

The December 2015 digital anime update is further highlighted by additions to several other top-rated VIZ Media series including:

BLEACH
·         Continue the epic supernatural action and drama of BLEACH (dubbed) with the addition of Season 25, Episodes 343-354 (dubbed) available to steam now! BLEACH is also currently available to stream subtitled with Episodes 1-366.

K: RETURN OF KINGS
·         Season 2 Episodes 10 will be available to stream (subtitled) on Friday December 4th, with a new episode each week! These episodes join the complete first season, available dubbed or subbed!

·         With the balance of power between the seven kings shifting once again, Silver King Yashiro Isana finally makes his return to the world, this time to face his destiny head-on.

NARUTO SHIPPUDEN
·         Ninja action continues with Season 2 of the NARUTO SHIPPUDEN anime series during December with Episodes 68-72 available to stream December 27th in their entirety with dubbed English dialogue! Get your friends into Naruto Shippuden over the holidays with over 70 episodes streaming from the very start.

ONE-PUNCH MAN
·         Catch the simulcast premiere of Season 1, Episodes 10 (subtitled) on Sunday December 6th, with a new episode available to stream each week!

·         Saitama is a hero who only became a hero for fun. After three years of “special” training, though, he’s become so strong that he’s practically invincible. In fact, he’s too strong – even his mightiest opponents are taken out with a single punch, and it turns out that being devastatingly powerful is actually kind of a bore. With his passion for being a hero lost along with his hair, yet still faced with new enemies every day, how much longer can he keep it going?

RANMA ½
·         The hilarious hijinks of the classic anime martial arts adventure, RANMA ½, continues with the addition of Season 5, Episodes 93-115 available to stream now in their entirety with dubbed English dialogue!

Posted by Leroy Douresseaux at 5:16 AM