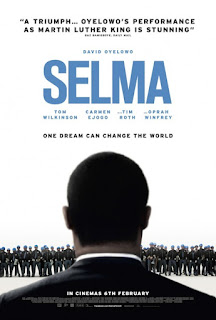 Selma opens in 1964.  Dr. Martin Luther King, Jr. (David Oyelowo) of the Southern Christian Leadership Conference (SCLC) accepts his Nobel Peace Prize.  King believes that after the passage of the “Civil Rights Act of 1964” (which outlawed discrimination), the next big effort for civil rights should be to secure voting rights for Black Americans, especially in the South.  He and the SCLC decide that the campaign to secure equal voting rights will be highlighted with an epic march from Selma to Montgomery, Alabama in 1965.

However, several forces gather to stop the march.  President Lyndon B. Johnson (Tom Wilkinson) wants Dr. King to hold off on seeking voting rights until after Johnson can push through his “War of Poverty” program.  Alabama Governor George Wallace (Tim Roth) wants to bring an end to Civil Rights activism in his state, and decides to use force, including state police and local law enforcement, against marchers and protesters.

Meanwhile, Coretta Scott King (Carmen Ejogo), Dr. King's wife, is concerned for her husband's safety and for the disruption to their marriage and danger to his family caused by his work.  Younger Black activists, such as the Student Nonviolent Coordinating Committee (SNCC), are not happy with Dr. King and the SCLC's methods.  Worst of all, dark forces are gathering to keep the marchers from crossing Edmund Pettus Bridge, which will keep them from leaving Selma.

Like many Civil Rights films, documentaries, and television movies, Selma is an epic, but not by being grand.  Director Ava DuVernay composes the film as an intimate tale that closes in on its subjects.  Selma is not about the struggle of the Civil Rights movement at large, but about the struggle of the key players, especially Dr. Martin Luther King, Jr., at a particular moment in time.

Now, having seen the film, I cannot understand the controversy that surrounded Selma regarding its portrayal of President Lyndon B. Johnson.  Some... what can I call them... fans, admirers, protectors of Johnson's legacy, etc. claimed that Selma played the late President as if he were a villain and an obstacle in the Civil Rights movement.  First of all, this film is a dramatization of the events surrounding the Selma to Montgomery voting rights march, and, thus, the President Johnson that appears in the film is a fictional depiction of a real person.  Secondly, the doubts, reservations, objections that the fictional Johnson expressed here are the same expressed by other characters in Selma, including characters involved in the marches.

Paul Webb's screenplay for Selma depicts nearly all of the major characters and main supporting players as having feet of clay, of being fragile and vulnerable.  They are self-interested and self-serving, often to protect what they see as right for the Civil Rights movement, but also to protect themselves and loved ones in a time that was dangerous for many, but especially for people involved in the movement, in particular for Black people, but also for some White people.

Selma is not colorful and whimsical like fellow best picture Oscar nominee, The Grand Budapest Hotel.  It is not arty and guileful like the behind-the-scenes Birdman, with its sense of familiarity for actors.  Selma is meat-and-potatoes.  DuVernay does not compose the Selma to Montgomery march as a grand, historical event, as if it were a history-changing struggle taking place on the kind of wide-open battlefield that is perfect for an epic conflict.

DuVernay closes in on the players in this movement, showing the inner workings of a social movement.  This is not the stuff seen on television, like the march itself.  This is that unseen stuff, the details that are not glamorous, and sometimes seems petty and trivial, except to those making them and living with the consequences.  This intense focus on the interior workings creates a sense of claustrophobia, but also so of dread.  Selma often seems like a thriller, because DuVernay brings the audience in so close that they might feel as if they are there.  Watching this film, I felt endangered.

The one glitch in this film, I think, is that it sometimes feels disconnected from the larger Civil Rights movement.  It is as if nothing came before the marches or would come after it.  Sometimes, Selma simply seems out of context.

As Dr. Martin Luther King, Jr., David Oyelowo gives Selma its best performance.  Oyelowo's is both an imaginative and a bold presentation of Dr. King.  In the decades since his assassination, many people have made him both a martyr and, sadly, an idol of adoration.  This worship of a false idol is dangerous because it allows people who were or would have been against Dr. King and the Civil Rights movement to appropriate him and the movement.  It is as if he is a religious figure that can be reshaped for whatever cause or ideology that needs King's moral position.  Oyelowo makes Dr. King human, fragile, and self-serving or self-interested, if not quite selfish.  Thus, when Oyelowo brings out the best of Dr. King, it seems genuine and honest, rather than expected.

I think that Selma should have been a more popular film and that it should have received more Oscar nominations than it did (two).  In the end, box office and industry accolades don't matter because Selma will stand out as one of the truer cinematic expressions of the Civil Rights movement, which was a fight for freedom and for the soul of the United States of America.