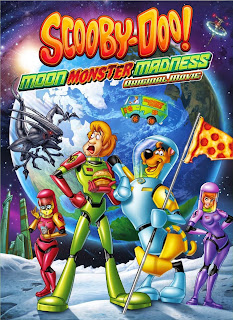 Scooby-Doo! Moon Monster Madness is a 2015 straight-to-video, animated, comic mystery film.  It is also the 23rd animated movie in the Scooby-Doo straight-to-video series from Warner Bros. Animation, which began in 1998 with Scooby-Doo on Zombie Island.  In Moon Monster Madness, Mystery Inc. travels to an elaborate moon base where they attempt to unravel the mystery of an alien monster.

Baron also creates the “Sly Me to Space” sweepstakes, a lottery that give the last 5 seats on the Sly Star One to ordinary folks.  And the winners are Fred Jones (Frank Welker), Daphne Blake (Grey DeLisle), Velma Dinkley (Mindy Cohn), Shaggy Rogers (Matthew Lillard), and Scooby-Doo (Frank Welker).  The cruise is not filled with fun, however, as rivalry, jealousy, and hero worship cause trouble.  And the space tourists soon discover an alien monster wants to ruin their trip to end their lives.

Scooby-Doo! Moon Monster Madness is somewhat inventive.  It is sometimes funny.  It references and has allusions to famous science fiction movies and films about space travel, such as 2001: A Space Odyssey (1968), Alien (1979), Aliens (1986), and The Right Stuff (1983).  The problem is that Moon Monster Madness just does not come together.  It is a little too long; has too many guest or supporting characters; and does not fully utilize many of the characters or sub-plots and themes.  Personally, I would have liked more screen time for “U-Boat” and H.A.M.


Posted by Leroy Douresseaux at 7:23 PM