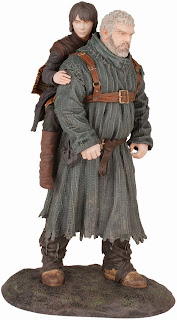 Dark Horse is now revealing new additions to their successful ongoing line of figures based on the hit HBO® series Game of Thrones®!

“We have been floored by the response to these figures,” Dark Horse product development head David Scroggy noted, “and these will give fans the new favorites we have come to know as the epic saga unfolds."

Sansa Stark, the oldest Stark daughter, fled King’s Landing to the Eyrie with Littlefinger’s assistance after Joffrey’s murder and now travels alongside him. The figure measures 7.75” in height.  The fine detailing of her black and midnight blue dress is exactly as seen in the HBO series.

Jorah Mormont, an exiled Northern lord, originally joined Daenerys’s company as a spy on behalf of King Robert, but ultimately became committed to her cause. He followed Daenerys, providing counsel, but was banished when she learned of his betrayal. The Jorah figure measures 7.85” in height, with the paint application reproducing the nuances of his likeness and costume.

Sandor Clegane, the former Kingsguard better-known as The Hound, abandoned King Joffrey and his post during the Battle of Blackwater. After encountering Ayra Stark at the Riverlands, he held her captive while travelling to the Eeyrie in hopes of collecting a ransom.   The Hound’s formidable proportions are reflected in this 8.4” figure. He is shown wearing his signature helmet, which is hinged so that it opens and closes.

Brienne of Tarth, warrior of House Tarth and vassal to House Baratheon, is a skilled fighter. After serving as the Kingsguard for Renly Baratheon and the sworn sword of Catelyn Stark, she bonds with Jaime Lannister while escorting him back to King’s Landing, where  he gives her a new suit of armor and a Valyrian steel sword reforged from Eddard Stark’s great sword, Ice. This armor is reproduced on our 8” tall figure, with all the impeccable details accounted for.

Tywin Lannister, former Hand of the King and head of House Lannister and Lord of Casterly Rock, was one of the most powerful lords in Westeros.

Joffrey Baratheon, former King of Westeros before his untimely murder at his wedding, was over-indulged and cowardly. He exhibited a cruel streak toward the vulnerable.

Petyr (“Littlefinger”) Baelish, the eyes and ears of King’s Landing, left his role as master of coin in the Small Council to secure the Vale by marrying Lysa Arryn.

Hodor and Bran are practically inseparable since Bran was pushed from a tower in Winterfell and lost the ability to walk. In this figure, Hodor carries Bran Stark on his back, immortalizing the close bond the two characters share. This special “double figure” is larger than others in the line, measuring a Hodor-sized nine inches, including the base.

These Game of Thrones figures have a suggested retail price of $24.99-$39.99 and are presented in deluxe window box packaging.


About HBO Global Licensing
HBO Global Licensing officially licenses the HBO® brand for the development and merchandising of innovative product lines inspired by the network's award-winning programming. With products created around hit series like Game of Thrones® and True Blood® as well as classic series like The Sopranos®, Sex and the City®, and Entourage, items include fashion apparel, figures, jewelry, digital and CD soundtracks, prop and costume replicas, games, books, and beverages, as well as exclusive, premium collections in partnership with upscale, designer brands. Merchandise can be purchased in retail stores nationwide, at http://store.hbo.com, and at the groundbreaking HBO retail hub, the HBO Shop®, located at 42nd and 6th Avenue in New York City. HBO Global Licensing products are also sold internationally across Europe (www.hboshopeu.com), Asia and Australia.