Review: "The Hobbit: The Battle of Five Armies" a Fantastic Ending to a Joyous Trilogy 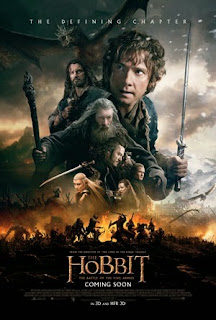 FANTASY/ACTION/ADVENTURE with elements of drama

The Hobbit: The Battle of Five Armies is a 2014 fantasy-adventure film from director Peter Jackson.  The film is the third of three movies which are based on J.R.R. Tolkien’s 1937 novel, The Hobbit, or There and Back Again (better known by its abbreviated title, The Hobbit).  Set sixty years before The Lord of the Rings, The Hobbit is the story of a curious Hobbit who joins a company of 13 Dwarves on a mission to reclaim their homeland from a powerful dragon.  The Hobbit: The Battle of Five Armies centers on the struggle to control the Lonely Mountain.

As The Hobbit: The Battle of Five Armies begins, Smaug (voice of Benedict Cumberbatch), the dragon that ruled over the Lonely Mountain, attacks the human settlement, Lake-town.  Now, only Bard the Bowman (Luke Evans), who is practically an outcast among his fellow humans, knows how to stop the dragon, but can he actually do it?

The Hobbit, Bilbo Baggins (Martin Freeman), has helped the Company of Dwarves, at last, reclaim their homeland, Erebor.  Having rid themselves of Smaug, the Dwarves settle into their ancestral home.  However, their would-be king, Thorin Oakenshield (Richard Armitage), decides that he wants to keep the vast, uncountable treasure in Erebor for himself.  He seals off Erebor, even as the human survivors of Lake-town seek refuge in the nearby ruins of Dale.

Bilbo soon finds himself caught between different groups that want a share of the treasure of Erebor.  Bard, now the spokesman and ostensible leader of the humans, wants the share of the treasure Thorin promised to the humans if they helped him; now, Thorin refuses to honor that promise.  Meanwhile, the Wood-elves and their arrogant king, Thranduil (Lee Pace), have arrived in Dale, seeking the white diamonds that belong to the Elves.  While Dwarves, Elves, and humans squabble, the blood-thirsty Azog the Defiler and a war party of Orcs marches toward the Lonely Mountain like a rising tide of darkness, prepared to conquer and to kill.

When I heard that Tolkien's The Hobbit would be adapted into two films by Peter Jackson, the guiding force behind the Lord of the Rings films, I was quite pleased.  I have loved The Hobbit since I first saw the 1977 animated television film adaptation, and I have read Tolkien's original novel at least three or four times.  I was ambivalent when I heard that the two-film adaptation would become a three-film adaptation.  After seeing the second film, The Hobbit: The Desolation of Smaug, I was suddenly quite interested in the third film again.

The Hobbit: The Battle of Five Armies did not disappoint me.  I do think that the word, “war,” is spoken too many times in this movie (for my taste).  Other than that, I love The Battle of Five Armies unconditionally.  The Hobbit reminds me of a grand adventure that a boy or a young man has with this friends.  Soon, the adventure is over, and he must say goodbye to his friends – some for only a short time, some for a long time, and others forever.

The filmmakers retained the sense of friendship throughout the trilogy.  The undertaking of an adventure that becomes a coming-of-age adventure also permeates The Hobbit film trilogy.  However, The Battle of Five Armies most personifies themes of friendship and obligation, and the sense of a bond between companions is strong in this movie, making it poignant as well as thrilling.

In the end, I thank Peter Jackson for his efforts.  I find it hard to think critically about this film individually or The Hobbit trilogy as a whole.  I felt The Hobbit: The Battle of Five Armies in my heart, and yes, I teared up quite a bit, especially during the goodbyes.  I wish there were another adventure to come, but I can always revisit this one.


Posted by Leroy Douresseaux at 6:23 PM