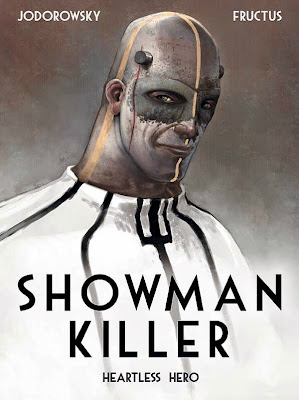 Titan Comics are thrilled to announce their publication of Alejandro Jodorowsky's Showman Killer: Heartless Hero, coming this November (2015). Telling the story of the titular assassin, the tale is full of the world-renowned writer/directors' trademark esoteric flair and uncompromising vision.

Space is a dangerous place, made more so by the existence of the Showman Killer, a heartless assassin, genetically engineered by an insane scientist to be devoid of any emotion, and trained to kill.

The only things that give him anything approaching pleasure are destruction or money. That is, until a fateful mission throws him into the path of the mysterious and fascinating Ibis.

Showman Killer: Heartless Hero hits comic stores on November 16 and will be available digitally to read on your digital devices.

Retailers can order now from the June edition of PREVIEWS, using the order code JUN151560

To keep up to date with news about Showman Killer, connect with Titan Comics on Twitter (https://twitter.com/ComicsTitan), Facebook​ ​(https://www.facebook.com/comicstitan) and Tumblr (http://titancomics.tumblr.com/)

Posted by Leroy Douresseaux at 7:18 PM