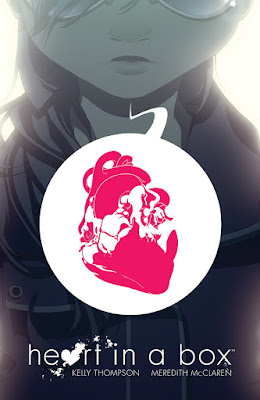 GET READY TO OPEN UP A DIGITAL ‘HEART IN A BOX’

MILWAUKIE, OR—Before fully opening Kelly Thompson and Meredith McClaren’s Heart in a Box in September 2015, become one of the first to get a FREE glimpse at the duo’s original graphic novel via Dark Horse Digital.

As a special advance look, Dark Horse will serialize Heart in a Box in seven chapters over the next six weeks, with the first two chapters available now on Dark Horse Digital. The first chapter is FREE for all users, and all subsequent chapters will be priced at an affordable $0.99.

In a moment of post-heartbreak weakness, Emma wishes her heart away, and a mysterious stranger—who may or may not be totally evil—obliges. But emptiness is even worse than grief, and when Emma learns that her heart can be regained piece by piece, she takes the strange bargain. But will the cost of her heart be her soul?

A fresh, funny, and action-packed take on heartbreak, Heart in a Box is Thompson and McClaren’s first graphic novel collaboration and comes hot on the heels of Thompson’s novels, The Girl Who Would Be King and Storykiller; as well as her critically acclaimed work on Jem and the Holograms.

“We couldn’t wait to share Heart in a Box with readers, so we’re very excited to get it out early through our digital platform,” said Dark Horse editor Brendan Wright. “Kelly and Meredith have created something truly special, and after fans read it digitally, they’re definitely going to want to have a copy for their shelf.”

Heart in a Box chapter one and chapter two are available now on Dark Horse Digital.