Review: "Magic in the Moonlight" Does Not Cast Much of a Spell 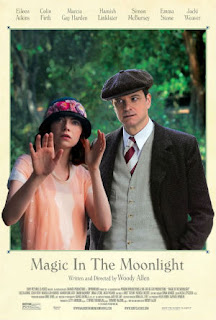 Magic in the Moonlight is a 2014 period romance and comedy from writer-director, Woody Allen.  The film focuses on an Englishman who travels to the south of France, where he becomes smitten with the young woman that he plans to reveal as a fraud.

Magic in the Moonlight opens in Berlin, 1928, where we meet the world famous illusionist, Wei Ling Soo (Colin Firth).  Soo is actually the Englishman, Stanley Crawford (Colin Firth), in disguise.  After a performance, Stanley receives a visit from his old friend, Howard Burkan (Simon McBurney), a fellow illusionist.  Burkan wants Stanley to accompany him to Côte d'Azur where Stanley can make use of the other talent that has made him famous.  Stanley can see past and also reveal the tricks of those who claim to have magical or supernatural powers.

In Côte d'Azur, a rich American family, the Catledges, are being taken in by a clairvoyant and mystic named Sophie Baker (Emma Stone).  In fact, the son of the family, Brice Catledge (Hamish Linklater), is so in love with Sophie that he wants to marry her.  Howard wants Stanley to debunk Sophie as a charlatan mystic.  Although he initially thinks that it will be easy to reveal Sophie as a fraud, Stanley soon finds himself smitten with her.

Magic in the Moonlight is not one of the better Woody Allen films.  It falls in the class of mediocre, hapless Allen films that have been prevalent since the turn of the century.  The casting is not particularly special, and the characters are mostly uninspired.  Emma Stone seems out of place as Sophie Baker, but there is not enough of Marcia Gay Harden as Sophie's mother, Mrs. Baker.

Magic in the Moonlight is not well-written, which is disappointing considering that Allen has won three Oscars for his screenwriting.  Allen's directing is mostly... well... uninspired.  However, the film does spring to life in its last half-hour, and it suddenly seems like a different film.  Why?  I think that Magic in the Moonlight lacks a true antagonistic relationship, although the film is ostensibly about one, being that Stanley Crawford is trying to prove that Sophie is a fraud.  Perhaps, Allen makes them fall in love with each other too soon.  Once betrayal is introduced into the narrative, the film has a real conflict and that brings it to life – too late, of course.

I will recommend Magic in the Moonlight to die hard Woody Allen fans who simply have to see each and every one of his films (like me).  Beyond that, there is no amount of magic in the moonlight that will make this movie of interest to people who are not fans of Allen.


Posted by Leroy Douresseaux at 4:50 AM