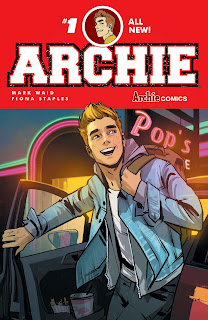 NEW YORK--(BUSINESS WIRE)--Archie Comics, the acclaimed and bestselling comic book publisher that is home to some of the best-known pop culture creations in the world, including Archie, Jughead, Betty & Veronica, Josie & The Pussycats, Sabrina the Teenage Witch and the hit AFTERLIFE WITH ARCHIE series, announced today that it would launch a historic crowdfunding campaign via the popular Kickstarter platform.

“When I first stepped into the Archie offices, the brand was frozen in time. The stories felt stiff and dated. That’s no longer the case”

The Kickstarter campaign’s call to action is a simple one: Help Archie Comics build a New Riverdale. Specifically, the Kickstarter will ask fans to help fund a slate of titles that build off the surefire success of ARCHIE #1 — the debut issue of a new, ongoing ARCHIE series from writer Mark Waid (Daredevil, Kingdom Come) and artist Fiona Staples (Saga). The series will be crafted by some of the biggest names in the comic book industry and feature the most beloved characters in comic book history.

The three new titles, launching over the next 18 months, include:

BETTY AND VERONICA — Girl-next-door Betty Cooper and wealthy socialite Veronica Lodge are best friends and fiercely competitive. While they both have a history with that guy Archie, the series puts the focus squarely on them — their friendship, their high school lives and adventures beyond Riverdale. Written and drawn by comic book legend Adam Hughes (Wonder Woman, Before Watchmen: Doctor Manhattan).

LIFE WITH KEVIN — Kevin Keller, the hugely-popular and historic character that broke new ground in Riverdale by being the first gay character in the company’s publishing history returns in a new ongoing series. Writer/artist Dan Parent (Kevin Keller) and inker J. Bone (The Spirit) tell a tale of an older, more experienced Kevin as he navigates a new city, new romance and leaving home.

“Our fans are part of our family — they’re an integral part of everything we do,” said Archie Comics Publisher/Co-CEO Jon Goldwater. “We’re not flush with corporate cash like Marvel or DC. But we’re also not afraid to take calculated risks. With this Kickstarter, fans have the chance to get in on the ground floor of an exciting and forward-thinking initiative. Fans can help build a New Riverdale, brick-by-brick. We’ve put together a stellar lineup of titles — featuring the best and the brightest creators working on our top characters. With your help, we can make this New Riverdale a reality. The best part? This is only the beginning.”

The crowdfunding initiative marks the latest part of the company’s 75th anniversary celebration — while also marking the beginning of a new era for the long-running publisher. With the launch of ARCHIE #1 on July 8, the company will be poised to reimagine its core characters while retaining the humorous and edgy elements that made them instant sensations when they first appeared.

“When I first stepped into the Archie offices, the brand was frozen in time. The stories felt stiff and dated. That’s no longer the case,” Goldwater said. “This is a new Archie. A new Jughead. A new Betty and Veronica and a new Kevin. We’re holding onto the things that made them great — the humor, the love triangle, the friendship and youthful exuberance — but presenting them in a way that can appeal to everyone, from classic comic fans to new readers who might not know every nook and cranny of our history. Each part of this is a brick that will help build a New Riverdale. But we can only do it with your help.”


ABOUT ARCHIE COMICS:
Archie Comics is the leading mass market comic book publisher in the world and the home to a wide array of the most popular humor, action-adventure and superhero characters in entertainment, including Archie, Jughead, Betty and Veronica, Reggie, Kevin Keller, Josie and the Pussycats, Sabrina the Teenage Witch, Afterlife With Archie, the Dark Circle Comics superhero characters (The Black Hood, The Fox, The Shield and more), Li’l Jinx and many more. Archie Comics have sold over 2 billion comics worldwide and are published around the world in a number of languages. In addition to comics, Archie characters have been featured prominently in animation, television, film and music. Follow Archie Comics on Twitter, Facebook, YouTube and the Archie Comics Store.

Posted by Leroy Douresseaux at 5:10 AM