Comic Book Adaptation of "Fear and Loathing" Due October 2015 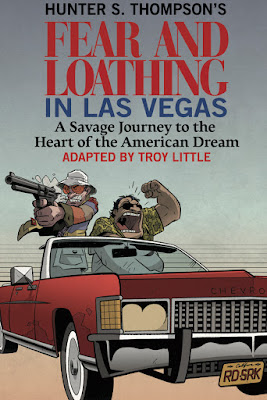 What were we doing out here…? What was the meaning of this trip? Did I actually have a big red convertible out there on the street? Was I just roaming around these Mint Hotel escalators in a drug frenzy of some kind, or had I really come out here to Las Vegas to work on a story? — Hunter S. Thompson, Fear and Loathing in Las Vegas

In that spirit, and in proud partnership with the Thompson ​Estate, Top Shelf Productions is pleased to announce Fear and Loathing in Las Vegas, a delightfully bonkers graphic novel by Eisner-nominated artist Troy Little adapting Thompson’s book of the same name.

“I’m so pleased that one of the first collaborative projects to come out of the Top Shelf / IDW relationship will be Troy Little’s inspired take on a true classic of American literature,” said Top Shelf Editor-In-Chief Chris Staros. “One of the most unforgettable writers turned loose in one of my favorite cities! We can’t wait to show you what Troy’s done with it.”

The much-beloved Fear and Loathing, subtitled “A Savage Journey to the Heart of the American Dream,” follows Thompson a​lter-ego Raoul Duke on the mother of all Vegas benders, as he and his attorney Dr. Gonzo cover a motorcycle race, crash a drug-enforcement convention, and rack up obscenely large room-service bills, all while dosed to the gills on a truly spectacular assortment of mind-altering substances.

“Buy the ticket, take the ride.” Fear and Loathing in Las Vegas comes to a store near you this fall!

Posted by Leroy Douresseaux at 5:43 AM