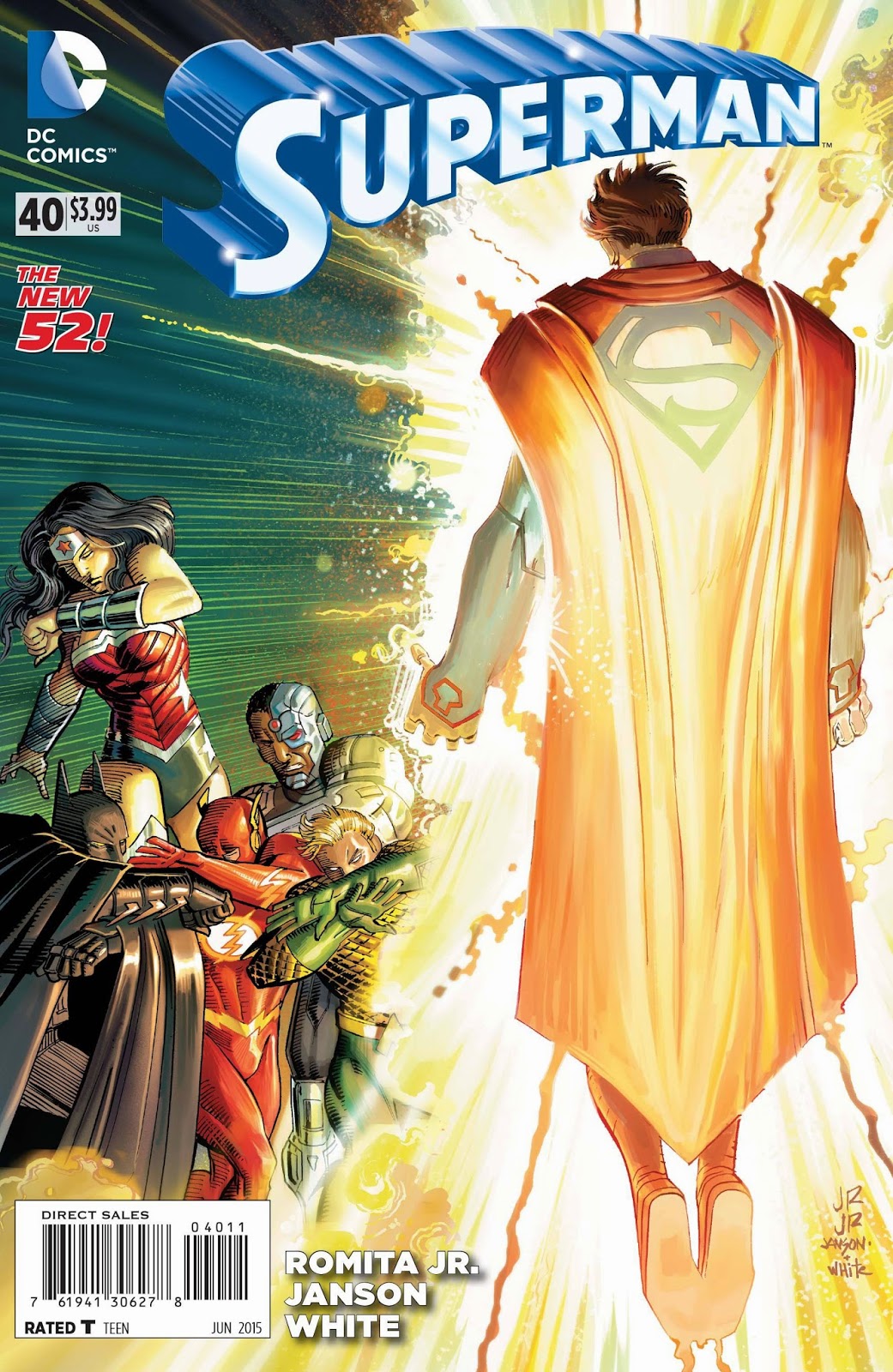 The bestselling writer/artist team of Scott Snyder and Greg Capullo debuts the harrowing finale of “Endgame” in BATMAN #40 in which the Dark Knight and his allies (including some of his greatest foes) try to cure a Joker virus-infected Gotham City full of grinning maniacs. Batman has the ultimate showdown with The Joker to get the cure and save the city in a finale that’s shocking, game-changing and not to be missed!

As one climatic battle ends, an intergalactic war begins in JUSTICE LEAGUE #40 from celebrated writer Geoff Johns and artist Jason Fabok. The iconic team of Super Heroes face off against the most powerful entities in existence as a riveting, canon-changing adventure unfolds in this prologue to the blockbuster event, “The Darkseid War.”

He’s continued to bring Superman to life through his celebrated artwork, and now John Romita, Jr. will also write the newest issue of the bestselling series for the very first time in SUPERMAN #40. Writing and drawing this very special issue, Romita will helm the newest adventure when Superman tests his new power against an unlikely enemy – The Justice League.

All three of these fan-favorite series will intersect May 2 in the must-read Free Comic Book Day special issue, DC COMICS: DIVERGENCE. Not only will the results of the canon-changing events from these three issues unfold in this special issue, but award-winning writer Gene Luen Yang will also premiere his first installment as the new writer for SUPERMAN. Additional details, including a list of participating locations, can be found at www.freecomicbookday.com.

In THE MULTIVERSITY #2, Mastermind Grant Morrison teams up with Ivan Reis to bring fans the final chapter in the most mind-blowing super hero adventure of all time. THE MULTIVERSITY brings together the greatest and bravest heroes of the DC Multiverse to fight one last battle. But more than just a mere cabal of Super-Villains, they face the greatest evil that ever existed; an evil so massive, not even the magnitude of DC’s multiverse stands a chance against it! The final fates of the mystic hero Super Demon, the nightmare henchmen known as The Gentry and Nix Uotan, the Super-God, will all be revealed in this stunning finale to Morrison’s ultimate super hero tale.


About DC Entertainment:
DC Entertainment, home to iconic brands DC Comics (Superman, Batman, Green Lantern, Wonder Woman, The Flash), Vertigo (Sandman, Fables) and MAD, is the creative division charged with strategically integrating its content across Warner Bros. Entertainment and Time Warner. DC Entertainment works in concert with many key Warner Bros. divisions to unleash its stories and characters across all media, including but not limited to film, television, consumer products, home entertainment and interactive games. Publishing thousands of comic books, graphic novels and magazines each year, DC Entertainment is the largest English-language publisher of comics in the world.

Posted by Leroy Douresseaux at 6:35 PM