Vin Diesel Talks "Groot" and "Guardians of the Galaxy" 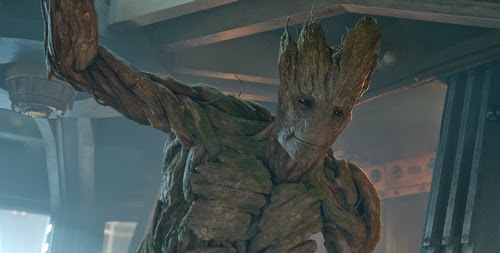 Walt Disney Home Entertainment provided the following question-and-answer interview with actor Vin Diesel as a promotion for its Blu-ray and DVD release of Marvel Studios' Guardians of the Galaxy.  "Q" is the anonymous questioner and "A" is Diesel:

Q: How was it working with a script where your only line is “I am Groot”?

A: I was lucky that I had a director [James Gunn] who was willing to indulge me. I told him: ‘We know that Groot is really saying any number of things when he says that line and most people are oblivious to the nuances of his speech because of his hardened larynx’. All you hear is the growl but he could be saying any number of things and we know that Rocket Raccoon understands him. He doesn’t always tell everybody he understands Groot and he plays on that, but he does understand him. So I asked James: ‘Can you give me a basic idea of what he’s trying to say when he’s saying “I am Groot”?’ James had a 50-page document waiting for me when I came in to do the voice. On the left-hand side of the page it said ‘I am Groot’ and on the right-hand side it had whatever the line really was if you could understand this floral colossus. That was the beginning of trying to go deep into a character like this. In many ways it was the most challenging thing to ask an actor to do. The thespian in me responded to the challenge of not being able to use facial expressions, physicality or a Golum-like vocabulary.

Q: Were there other actors in the recording booth with you?

A: No, there weren’t, but I did have the luxury of being able to watch the film. Both Bradley [Cooper, who plays Rocket] and I had the advantage of being able to play off the other actors by watching them in a rough cut of the film.

Q: Did you do any of the motion-capture for the character?

A: A lot of times in animation, what they’ll do is they’ll film you in the recording booth. So I went in there with stilts so I could actually be seven and a half feet tall. Don’t ask me why, but there was something about it that really helped with the character. In New York acting circles in the 1970s there was this legend that Robert De Niro didn’t know his character until he found that character’s shoes. Who knows how that works? But in its own way it did. For me, being seven and a half feet tall did something. I found myself dropping my shoulders, I was sometimes self-conscious about my height and sometimes I felt very powerful about my height, and it affected the character that way. Groot’s the most innocent character I’ve ever played. I don’t usually play characters who are that innocent.

Q: There’s something of Chewbacca from Star Wars in Groot. Was that deliberate?

A: The similarities are obvious and fun, but it wasn’t what I was thinking, going into it. It’s probably down to James Gunn.

Q: Was that you doing the dance moves for Baby Groot at the end of the film?

Q: And what would be the first track on your own Awesome Mix tape?

A: It’d be When the Saints Go Marching In; The Beatles version, by the way, not Elvis Presley’s. I’d also have Rocky Raccoon on there, also by The Beatles. People don’t know that the Rocket Raccoon came from a Beatles song. Who’d ever think that a Marvel character would be inspired by a Beatles song? They just changed him from Rocky to Rocket.

Q: You have millions and millions of Facebook followers. Why do you think that is?

A: I think it’s because I share my thoughts. Remember that movie The Social Network where they showed the beginnings of Facebook? They didn’t even know what they had started because they thought their brilliant idea was to check people’s marital status. [Laughs] But that wasn’t so brilliant. What was so brilliant was the idea of interaction. If I could have interacted with Marlon Brando as a kid, wow! If I could have spoken to him, or written to him, or read from him, or followed him – that is what has made social media what it is, that interaction. When I started on Facebook there was only Obama who had a million fans and he got elected, in part, because of his social media presence. When I started talking on Facebook I was being real. It was almost more therapeutic for me because I’d always been reserved. I’m not out there that much and I’ve always protected and maintained my privacy. I felt detached from my audience in some way, unlike my younger years on stage where you get that immediate gratification and you’re able to see how you’re affecting the fans and the audience. With Facebook, suddenly I was able to interact with people all over the world and essentially create this community. It was a very powerful moment. It was something very special and very therapeutic to me, and it’s something that’s affected the last five years of my career. So much that’s happened and so many of the accomplishments have come from that. In fact, the reason I’m here now talking about this movie is because Facebook fans started creating fan art that put me in the Marvel universe or fantasizing about me as a Marvel character. Then when I met with Marvel we were talking about doing something in the Phase Three, 2017/2018 slot. But social media demanded we do something now and that’s when [Marvel Studios president] Kevin Feige called me two weeks after I’d been to Comic-Con last year, and he said he’d come from the Captain America press junket and the big question was ‘What are you doing with Vin?’ Then he told me ‘You’re a tree’ and all my childhood phobias came back to me. I had to face that fear of walking onto the stage as a seven-year-old and having the director say, ‘Vin, you’re playing the tree’. [Laughs] Now we face our fears!

Q: How do you see the character developing in the next film?

A: I think there’s something very fun in imagining how that might be. I expect we’ll learn more about him. He’s such a complex and fascinating character. He’s a scion of a noble family and probably one of the most intelligent Marvel characters of all. He loses his intelligence every time he dies but he never truly dies and it’s a small price to pay for immortality.

Q: Besides other actors like Marlon Brando, who are your real-life heroes?

A: Well, our mothers are our first heroes. Mine is MY superhero because when I was an infant she was a single mother to me and my twin brother in New York, traveling from the Bronx to Brooklyn with two seven-month-old babies. And now look where I am! She’s a hero in that respect. She’s a special woman. My father is a hero, too.

Q: What drew you to acting in the first place?

A: I started acting at a young age. I remember being five years old and watching my father do roadshow theatre. We went up to Maine and I watched him. He’d dyed his hair white – I remember that. Later I grew up in a government subsidized building for artists in New York and if you made more than $10,000 a year you’d be kicked out of the building. It was kind of a bohemian artists’ community that made art for the sake of art, but for me there was something very therapeutic about acting. I was a kid like everybody else, maybe with a heightened quest for identity. Whenever I would play a role, the parameters of my identity were clear. There was something comforting or therapeutic about that.


Guardians of the Galaxy is available on Blu-ray, Digital HD and Disney Movies Anywhere December 9, 2014