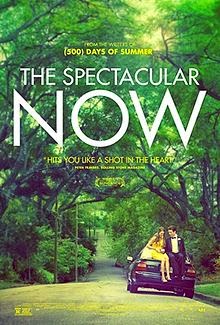 The Spectacular Now is a 2013 drama and romantic film from director James Ponsoldt.  The film is based on the 2008 novel, The Spectacular Now, by Tim Tharp.  The film follows a hard-drinking high school senior whose life changes when he meets a nice girl, the kind he previously ignored.

Sutter Keely (Miles Teller) is a high school senior who likes to drink and party.  He is charming and self-possessed, and he lives in “the now.”  He is also a budding alcoholic.  After a night of drinking, he wakes up in someone's yard, and standing over him is Aimee Finecky (Shailene Woodley).  She is the nice girl who reads science fiction and manga (Japanese comics), and does not have a boyfriend.  Sutter and Aimee start dating, but while Aimee dreams of a future with him, Sutter is not sure what he wants, other than to live in the “spectacular now.”

Much of the attention about The Spectacular Now, when it was released last year, focused on rising star, Shailene Woodley.  And she is indeed spectacular here.  She is a natural talent, and she seems like a pure movie star.  Perhaps, the camera does indeed love her, but I am sure that my eye-camera loves her.  Woodley is sincere and refreshing and makes this film sincere and refreshing – different from so many other romantic teen dramas.

However, Miles Teller also gives an exceptional performance.  Sutter Keely has soul, and he makes The Spectacular Now a truly soulful film.  Sutter has substance; there is something inside him.  He is a three-dimensional character, fighting in conflicts and holding motivation, even when it seems as if he does not have any motivation.  Teller is also a rising star, and has been cast as Reed Richards/Mr. Fantastic in 20th Century Fox's reboot of its Fantastic Four film franchise.  Teller doesn't necessarily look like a leading man, but he has the talent to take him to leading man status.

The Spectacular Now is a surprisingly good film, mainly because of its romantic leads, Teller and Woodley, but there are plenty of good supporting performances – actors that add to this film's wonderful sense of naturalism.  The always-good Kyle Chandler makes the most of his screen time in a small role as Sutter's absentee father.  Chandler is intense and coiled, as if he is ready to explode or to strike.  It isn't a showy performance; rather, it adds to this film's overall quality.  The Spectacular Now is... well, spectacular, but in a subdued and inviting manner.  In the history of American cinema, it will go down as an authentic teen movie.


Posted by Leroy Douresseaux at 4:09 PM