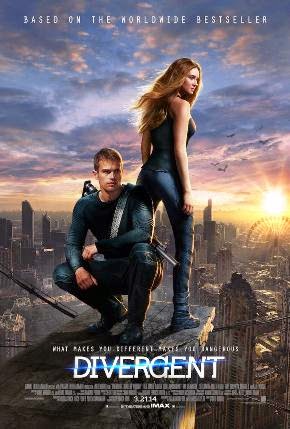 Divergent is a 2014 science fiction drama from director Neil Burger.  The film is based on the 2011 novel, Divergent, by author Veronica Roth.  Divergent the film is set in a world divided by factions and focuses on a teen girl who does not really fit in with any one faction.

Divergent is set in an indeterminate future and a dystopian Chicago that is a walled city.  There, society is divided into five factions:  Abnegation (the selfless), Amity (the peaceful), Candor (the honest), Dauntless (the brave), and Erudite (the intelligent).  There is also a sixth group, the “Factionless,” in which the members are homeless and shunned by everyone except Abnegation.

Beatrice Prior (Shailene Woodley) belongs to Abnegation with her mother, Natalie (Ashley Judd); father, Andrew (Tony Goldwyn); and brother, Caleb ( Ansel Elgort).  On her sixteenth birthday, Beatrice will take an aptitude test that is supposed to decide in which faction she would best fit.  She will also learn of a plot to destroy Divergents, people who think independently and do not really fit into any particular faction.  To which faction does Beatrice belong?  Or is she Divergent?

If honesty is the best policy (and often it is), then, I must be honest about my feelings concerning Divergent.  I love it – totally love it.  I enjoyed the hell out of this movie.  There, are two things about Divergent that stand out to me:  (1) the story's themes and messages and (2) Shailene Woodley's performance.

I think that Divergent the film is not literal dystopian science fiction so much as it is metaphorical and thematic.  It is not important that Chicago is a post-apocalyptic city full of survivors trying to both eek out a living and to maintain a social order that is supposed to... well, maintain social order.  In the film, Chicago is important as a setting where creeping individualism meets growing spots of selflessness.  Beatrice wants not only to be “herself,” but to also fit in where she wants.  Being an individual means being able to help people outside of one's caste, even if one's caste-mates frown upon that.  Divergent's story, as I see it, says that the individual and the society are not mutually exclusive.  In fact, the reign of one over the other means disaster for everyone.

As for Ms. Woodley's performance, she does what the best actors do with a character – bring them fully to life.  She makes Beatrice's wants and desires, conflicts and confusion, and her goals and struggles tangible, as if they belong to an actual living person.  When an actor can do this, she makes the audience buy into the character, as if the character were a real person.  I can see why people compare Woodley to fellow millennial actress, Jennifer Lawrence, but they are different from each other.  Lawrence's characters tend to be brash and bold, even when they are vulnerable.  Shailene Woodley is vulnerable and brash and brave in equal measures and at the same time.

Theo James, as the love-interest, Four, is good.  Perhaps, director Neil Burger makes him scowl more than he needs to do for this young male character who must be upfront and hidden.  James, however, has a screen quality that at least serves this film well.

In some ways, Divergent is predictable and follows the hero vs. the system journey so common in films adapted from Young Adult (YA) dystopian science fiction and fantasy books.  However, Divergent is not generic because of Woodley, by both her performance and her engaging screen presence.  She grabbed me and forced me to live in Beatrice's world.  I am glad that this film's box office success has yielded a sequel.


Posted by Leroy Douresseaux at 4:12 PM