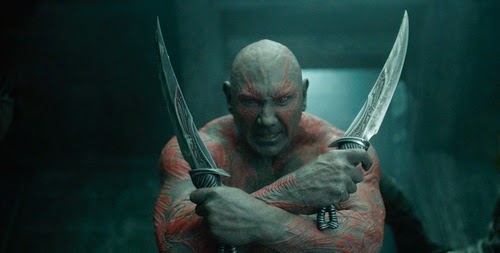 Walt Disney Home Entertainment provided the following question-and-answer interview with actor Dave Bautista as a promotion for its Blu-ray and DVD release of Marvel Studios' Guardians of the Galaxy.  "Q" is the anonymous questioner and "A" is Bautista:

Q: What were the big physical challenges for you on Guardians Of The Galaxy?

A: I didn’t actually find it physically super-challenging, to be honest. It was so much fun, man. I don’t want to make it seem like it was a simple project because it wasn’t that by any means, but I didn’t wake up in the morning thinking ‘Goddammit, I’ve gotta go to work’. I was happy and excited. It’s hard to say it was challenging because it was such a good time.

Q: How did you deal with the long hours in the make-up chair?

A: I just zoned-out, but I’m usually a pretty quiet person. I know that’s a really boring answer but it’s true. It wasn’t as bad as people might think because it was kind of like hanging out with your friends for a few hours, just talking, and the time flies by. It was more of a chore taking the make-up off – getting gunk out of your ears and your nose.

Q: You’ve said you can relate to the character of Drax. Can you explain that a little further?

A: Your first assumption with Drax is that he’s just this one-note, stereotypical warrior who looks menacing and scary, but the way I approached him is as a father and a husband who’s really suffering from a lot of heartbreak. He channels his heartbreak into revenge. I can relate to him because I’m not the person I appear to be at first glance. It’s kind of a double-edged sword for me because I actually look this way as a result of the way I am internally. I spent my whole life being very shy and introverted and I kind of found my release and therapy in the gym. I became this big, menacing physical stature of a man but internally I’m still kind of insecure. [Laughs] Warm, fuzzy and gooey.

Q: How was working with Zoe Saldana (Gamora)?

A: I have the toughest time describing her to people because there are different sides to her personality. On one hand she’s very strong and intelligent, but at the same time she’s like a princess. If you say she’s a princess it’s gonna make her sound like a little ditzy thing and if you say she’s strong and intelligent it makes her sound very stern. I always say she’s a diva, but not in a bad way. With most people you say ‘She’s a diva’ and people think ‘Well, that means she’s a bitch’ but Zoe’s like a diva in a good way.

Q: Given your WWE background, did your fellow cast members look to you for advice on falling without hurting themselves etc?

A: Actually, it was so different from anything I’d ever done that I put myself in the student role. What they do in films is so different; it seems so much more precise and it’s working towards camera angles whereas in wrestling it’s physical improvisation and the cameras are moving to suit us, you know? We’re not working for the cameras; we’re working for a live audience, so it’s really different. There were things I wasn’t qualified to do, like a lot of the big stunts. I didn’t feel safe doing those.

Q: How was Guardians director James Gunn to work with?

A: He had such a clear vision and he made it super-simple. You always knew exactly what he wanted. I learned from Zoe to ask a lot of questions. As I say, I’m usually very quiet and I don’t say much, but I learned to start thinking of things from different angles and different peoples’ perspectives and to ask questions that made total sense to put you in the mood. James always had an answer.

Q: Was there a defining moment when you decided you wanted to try acting?

A: I’d done a few bits and pieces, some TV stuff, when I was with the WWE but still I had no interest in pursuing acting. Then I did a cameo in a movie which was not a great movie; it was called The Wrong Side Of Town and I did a cameo in it as a favor for a friend. I went to shoot it on the first day and I realized how bad I was at acting. I thought it would be easy, for some reason, but I could feel how horrible I was. I was a little bit embarrassed. But I usually find that I want to pursue things that I’m terrible at because it’s a challenge for me. It was a defining moment because I realized I sucked as an actor.

Q: Do you collect action figures of yourself?

A: I used to collect the wrestling ones but there were just so many of them so I gave up. They’d put out a new one like every week. It was ridiculous. That’s what the WWE does – they’re a merchandising machine. I was injured for a while, I was on TV and I had to wear this stupid Ace bandage. I was given a pretty light schedule and I went to do an autograph signing session. I was sitting there one day, this kid came through and he had this action figure with an Ace bandage. I said ‘That’s cool, did you make that?’ and he said ‘No, I bought it’. While I was still injured they’d put out an injury edition Bautista doll. That’s how fast they’re on it. It’s insane.


Guardians Of The Galaxy is available on Blu-ray, Digital HD and  Disney Movies Anywhere December 9, 2014