Review: "A Madea Christmas" a Funny and Odd Christmas Movie 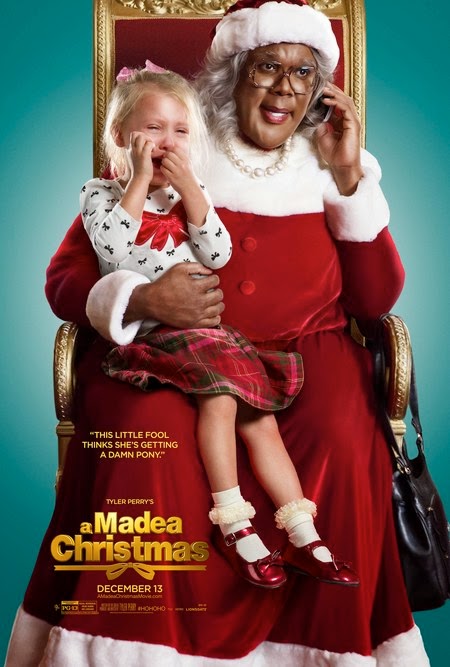 A Madea Christmas is a 2013 comedy, drama, and Christmas movie from writer-director Tyler Perry.  The film is based on Perry's musical play, A Madea Christmas, which was first performed in 2011.  A Madea Christmas the movie finds Madea in rural Alabama after being coaxed into helping a relative pay her daughter a surprise visit for Christmas.

As A Madea Christmas begins, Mabel “Madea” Simmons (Tyler Perry) is working at Tifton's department store for some extra Christmas cash, thanks to her niece, Eileen Murphy (Anna Maria Horsford), who works at the store.  Eileen is sad that her daughter, Lacey (Tika Sumpter), is living in the small town of Bucktussle, Alabama, and she wants to visit her.  Eileen coaxes Madea into accompanying her for a surprise Christmas visit.

What Eileen does not realize is that her daughter is now Lacey Williams and is married to her college sweetheart, Conner Williams (Eric Lively).  Lacey is not ready to tell her mother that she is married to a White man, but may be forced to when Eileen and Madea arrive.  Also arriving at Lacey and Conner's doorstep are Conner's parents, Kim and Buddy Williams (Kathy Najimy and Larry the Cable Guy).

A Madea Christmas is an odd entry in Tyler Perry's Madea film series.  First, the film deals, in a fluffy way, with racism, and is also set in a town and area that is largely white.  With its mushy sentiment, soft-focused racial harmony, and easy pace,  A Madea Christmas seems like an original holiday movie for either the Lifetime or Hallmark cable networks.

I found this film enjoyable and comfy, and although Madea does dispense her usual unique brand of wisdom, the film is not as preachy as previous Madea films.  A Madea Christmas' dominant theme seems to be that parents should accept that their children will live the lives the children choose and not the ones the parents want.  There is also a subplot about a sensitive and talented boy, Bailey McCoy (Noah Urrea), whose father, Tanner McCoy (Chad Michael Murray), is a racist and a bully (but not really in an especially offensive way).  This subplot encapsulates how A Madea Christmas goes out of its way not to offend or scare white audiences.

I don't think that A Madea Christmas will be a Christmas classic, but it is definitely a different kind of Christmas movie.  I found it to be quiet funny at times, and I plan on seeing it again.


Posted by Leroy Douresseaux at 12:25 PM