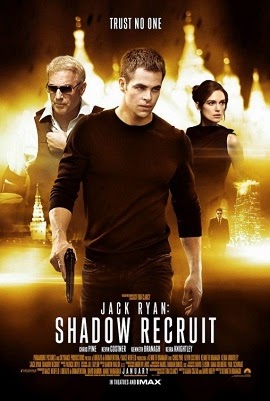 The subject of this movie review is Jack Ryan: Shadow Recruit, a 2014 action and espionage thriller from director, Kenneth Branagh.  This is the fifth film in the Jack Ryan film franchise, which began with 1990's The Hunt for Red October (based on the novel by the late author, Tom Clancy).  Shadow Recruit focuses on a young Jack Ryan as he tries to uncover a Russian plot against the United States.

Jack Ryan: Shadow Recruit opens at the London School of Economics, where Jack Ryan (Chris Pine) is a student.  The film also opens on September 11, 2001, the day of the terrorists attacks on New York City and Washington D.C.  Ryan joins the U.S. Marines after the attacks, but he is critically injured during a mission.  While undergoing recovery, Ryan meets and falls for Cathy Muller (Keira Knightley), a young medical student.  Muller, however, is not the only one who is watching Ryan.

Thomas Harper (Kevin Costner) of the CIA recruits Ryan into the agency.  A covert analyst, Ryan works for a Wall Street stock brokerage as a cover.  There, he discovers a Russian plot to crash the U.S. economy via a terrorist attack.  Ryan first dangerous mission takes him to Moscow to face the sinister Viktor Cherevin (Kenneth Branagh), but this dangerous mission suddenly takes a decidedly lethal turn.

Jack Ryan: Shadow Recruit is a reboot of the Jack Ryan film franchise.  This is actually the second reboot of Jack Ryan, as The Sum of All Fears (2002) was a fresh start for the franchise with Ben Affleck as Ryan.  Shadow Recruit is also the first Jack Ryan film not based on one of Tom Clancy's novels.  Perhaps, not being based directly on a Clancy novel is the missing ingredient for this film.  It lacks the complexity and large size of Clancy's work.  As for the screenplay:  Tom Clancy ain't Shakespeare, but he was quite good at what he wrote, and screenwriters Adam Cozad and David Koepp are not Clancy

Shadow Recruit does not have to reinvent the action-thriller, let alone the Jack Ryan movie, and it certainly does neither.  This film is a well-produced movie with some good moments, especially those that take place in Moscow.  Ultimately, Shadow Recruit is nothing special, nor is it particularly slick, a characteristic of big-budget, big studio American action films.

I like Chris Pine, but I think that at the age of 33 (when the film was made), he looks too young and too boyish, and lacks the gravitas to play Jack Ryan.  Kenneth Branagh plays beneath his talent here, and it's evident; he looks tired/bored as Viktor Cherevin.

Seriously, I think Jack Ryan: Shadow Recruit is best as a past-time you watch on an over-the-air television station one lazy Sunday afternoon.  Sadly, though, I think the Jack Ryan film franchise is done for, and that's a shame.


Posted by Leroy Douresseaux at 7:16 PM