Review: "The Hobbit: The Desolation of Smaug" is a Sensation 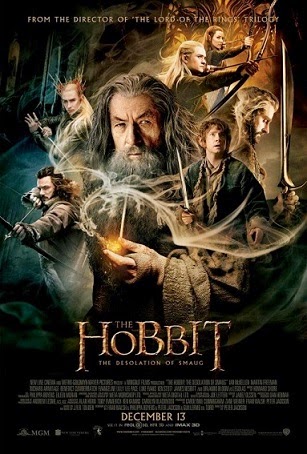 FANTASY/ACTION/ADVENTURE with elements of drama

The Hobbit: The Desolation of Smaug is a 2013 fantasy film from director Peter Jackson.  The film is the second of three movies which are based on J.R.R. Tolkien’s 1937 novel, The Hobbit, or There and Back Again (better known by its abbreviated title, The Hobbit).  Set sixty years before The Lord of the Rings, The Hobbit is the story of a curious Hobbit who joins a band of Dwarves on a mission to reclaim their homeland from a powerful dragon.

The Hobbit: The Desolation of Smaug finds Bilbo Baggins (Martin Freeman) still in The Company of Dwarves, led by would-be dwarf king, Thorin Oakenshield (Richard Armitage).  These 13 dwarves are on a quest to reclaim their homeland, Erebor, from the dragon, Smaug (voice of Benedict Cumberbatch).  Their goal is the Lonely Mountain, where Smaug slumbers.

Along the way, Bilbo and the Dwarves are pursued by Azog the Defiler and a party of Orcs.  They also encounter the Wood-elves and their arrogant king, Thranduil (Lee Pace), and are eventually pursued by two elves, Legolas Greenleaf (Orlando Bloom) and Tauriel (Evangeline Lilly), who are proficient at killing Orcs.  Meanwhile, the wizard, Gandalf the Grey (Ian McKellan), investigates the growing evil at the ruins of Dol Guldur.

I gave the first Hobbit film, The Hobbit: An Unexpected Journey a grade of “9” out of 10 on my rating scale, although I had complaints about the movie.  My biggest complaint was that it was too long, with the first hour meandering like a drunken narrative looking for a bottle of plot.

I have no complaints about The Hobbit: The Desolation of Smaug.  I love it.  I have seen it once, and watched most of it several more times on different HBO channels.  Like the prior films based on the fiction of J.R.R. Tolkien,  The Desolation of Smaug is a glowing spectacle.  It is not trapped by the “middle chapter” narrative difficulties that afflict the middle films of some movie trilogies, like Pirates of the Caribbean: Dead Man's Chest.  [By the way, The Lord of the Rings: The Two Towers was the middle film in a trilogy and did not at all suffer from middle chapter problems.]

Perhaps, for me, The Desolation of Smaug is personal.  I feel for the characters, and I am a champion for their causes, examining the stakes and decisions from every angle.  Director Peter Jackson is in love with The Hobbit, and it shows in this wonderful film.  I cannot pick out particular thing that stands out as great, although I love Benedict Cumberbatch as the voice of Smaug.  It is as if all elements come together to make a great film.

Over the years, I have read The Hobbit many times, and I am happy that these Hobbit movies, especially this one, are connecting with me in ways I never expected.  If you are already a fan of the previous Peter Jackson Tolkien films, you will be a fan of The Hobbit: The Desolation of Smaug.  Or like me, you will fall in love with it.

Posted by Leroy Douresseaux at 7:45 PM