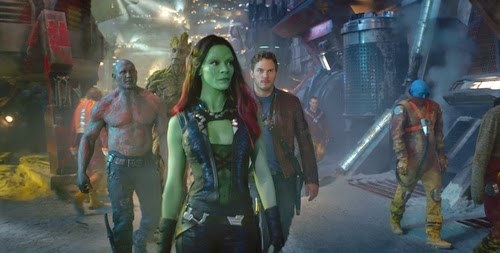 Walt Disney Home Entertainment provided the following question-and-answer interview with actor Zoe Saldana as a promotion for its Blu-ray and DVD release of Marvel Studios' Guardians of the Galaxy.  "Q" is the anonymous questioner and "A" is Ms. Saldana:

Q: So did all cast members get their make-up done together?

A: No, we didn’t; we had separate bungalows. It was only when we were all on set, all grey or green or blue and we couldn’t touch anything because we would just smear paint and stuff all over everything. We’d all sit together and Dave would be eating a super-healthy meal, I’d be having some fish and chips and Chris would be asking me: ‘So how’s the texture? Do you like the fish?’ He couldn’t eat it himself because he was on a strict diet so he was always asking me what my food tasted like.

Q: How did you while away the long hours in the make-up chair?

A: Listening to music, talking… Sometimes I’d ask about Dave and was told, ‘This dude is meditating – he sits there and doesn’t move for hours’ whereas sometimes they couldn’t even get me to sit down in the chair. My make-up artist, who I brought over from the States, would go ‘You need to sit down, get your dog and take a nap, otherwise we’ll be in trouble because I have to work on you’. My dog and I would wake up and we’d both be green!

Q: What’s worse, putting the make-up on or taking it off?

A: Putting it on, trust me. When it comes to taking it off I think it’s easier because you know you’re just 30 minutes away from being in a hot tub and then bed. You’re literally ripping it off your face. The skin is flexible and it perspires and it’s ready to have that layer removed so it’s much more cooperative. They also have all these awesome solutions. It took four and a half hours to put it on and maybe an hour and 15 minutes to take off.

Q: You’ve spoken about Dave being very shy. Is it safe to assume from your outgoing personality that you’re far from shy yourself?

A: I’m not shy at all. My mum has asked me to be a little more shy! She’s sometimes like ‘Can you just shut up?’

Q: Since you both have athletic backgrounds, did you and Dave do a lot of your own stunts?

A: We’re every stunt coordinator’s nightmare and every director’s dream. Directors wish their actors could do more of the physical stuff, more of the stunts, just so they don’t have to cut from a wide master shot into a tight close-up. With us, James was able to use many of our medium, master and close-up shots particularly with me, Dave and Chris. The stunt people don’t really like it because we come in and we learn everything within two tries. They get kind of p****d off because they don’t get to work as much. On the other hand, the stunt people who are playing your doubles are super-excited because they get to act [when they’re doubling for an actor]. They don’t have to spend the whole time just falling and getting hurt.

Q: I can’t think of any other actor who has three franchises going at the same time…

A: Wasn’t there someone who had two, like Sylvester Stallone? For many years Sly had First Blood and Rocky, right? [Laughs] And now it’s me? Believe me, this was never planned. In between these big films, I do films like Nina, Out of the Furnace and Blood Ties and Infinitely Polar Bear is coming out next year. It’s just that the big movies happen to get seen more than the small-budget ones I do, but I’m happy with it. I like playing roles where women have more significance – they just happen to be set in space and they just so happen to be made by filmmakers like James Gunn, James Cameron and J.J. Abrams. That’s not a bad list of filmmakers to work with so I say, ‘You know what, I’ll be green here, I’ll be blue there, I don’t care!’

Q: Speaking of Nina, how was it playing Nina Simone in the biopic?

A: It was a very tumultuous affair and I loved making it. We did it with so much love and I think her story is definitely worth telling.

Q: What have you learned from doing so many green screen movies?

A: It’s helped me appreciate the technicalities of filmmaking. It’s also taught me that the best thing is to always remain open and that there’s no such thing as a stupid question. Ask every single question that you can and try to work with filmmakers who will never lose patience with their actors. It’s important for a director to provide as much information, especially when we’re working with things that we have to conceive out of thin air. You can’t just expect an actor to understand: ‘Oh, there’s a dinosaur coming at you”. OK, so I’m going to automatically know how big it is and what it sounds like? I need details. How close does he get to me? How tall is he? What will the impact be of his cry when he’s screaming at me or when he’s blowing smoke or air in my face? James Cameron will bring you speakers that are twice your height and he’ll search the internet to find any sound that resembles as closely as possible the sound he’s looking for. He’ll play it to you seconds before he starts the scene and that is so helpful. I learned to always ask a lot of questions. It’s super-important.

Q: And how was Guardians director James Gunn to work with?

A: He was very generous with all the information we needed to have. He’d show us the animatics, he’d play the music, he’d explain the moment to us and how he envisioned it if we were not capturing the emotional beat as he wanted. He was very much invested even though he was taking care of ten thousand million things at the same time. You don’t want to feel afraid to ask a director something and if you do then that’s not a director you should work with after that.

Q: Do you think James learned anything from you?

A: [Laughs] How to be cool! No, I’m joking. I hope he did learn something. I really feel the wise directors are the ones who learn from their actors in terms of: ‘How can I be a better director? How can I be a better captain? I feel James is not an egotistical person. He’s very passionate and he’s also a little stubborn but in all the right places. He’s like good cholesterol. That’s James Gunn. We had moments where people thought it was tense because I was asking questions or trying to do something one way because I believed in it and James wanted me to do it another way, but we never argued; it was never a hostile environment. Sometimes Chris would go through the same thing -- it was just a passionate moment between all these artists who really care. James never abused his power by saying, ‘Just do it like I said’. He was like, ‘Please trust me, do it this way and we’ll see’. If we did it his way and it didn’t work he’d say really quietly ‘Alright, do it your way’.

Q: Was there a defining moment when you decided you wanted to be an actor?

A: I was a ballet dancer for so long, but when I realized I had reached my limit and that I couldn’t go any further I knew I wanted to pursue acting. That’s one thing you don’t use as a dancer – your voice. [Laughs] And the one thing I use most in my life is my voice so it’s wonderful to get to express myself artistically through the biggest instrument I use. I auditioned for the Scarecrow in The Wiz and my mum went with me because she wouldn’t let me go anywhere alone. She did not think I was good, and I remember we had that conversation of ‘Baby, if you’re going to do this, we need to figure out a plan, like taking a class’. I did and I started reading a lot. There was this book that Judi Dench wrote that said there was a moment where, before an actor can be this or be that, the actor must simply be. I thought that to have absolute presence was to absorb everything that’s thrown at you. I’ve been getting paid for it ever since and [laughs] I haven’t needed an excuse to quit or to do something else.

Q: Do you collect all the action figures based on the characters you’ve played?

A: Here’s the thing. I have nieces and nephews and when they find them in the house, they take them and they end up broken. So there’s no point in me collecting them. One day I walked in to find my niece playing with all the Star Trek figures and eating chocolate at the same time. I was like, ‘It’s OK, take them, I don’t need them, I don’t have to sell them later for $100.’

Guardians of the Galaxy is available on Blu-ray, Digital HD and  Disney Movies Anywhere December 9, 2014