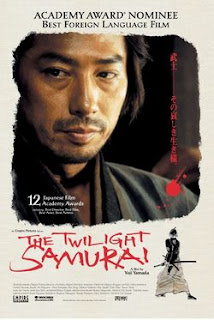 Although trained as a samurai and belonging to a samurai clan, Seibei Iguchi (Hiroyuki Sanada) doesn’t fight alongside his clan in any battles. In the late Edo period of Japanese history, this samurai is a bookkeeper who rushes home at dusk, but doesn’t join his comrades in any festivities. Instead, the recent widower devotes himself to his two young daughters, Kayana (Miki Ito) and Ito (Erina Hashiguchi), and his ailing mother, Kino (Reiko Kusamura); that and his lack of hygiene make him a curiosity to his fellow clansmen, who call him Twilight Seibei. However, his defense of his friend, Michinojo Iinuma (Mitsuro Rukikoshi), and his unusual fighting technique bring him unwanted attention and soon an assignment that could cost him his life – just as he is accepting his love for his childhood friend, Michinojo’s sister, Tomoe Iinuma (Rie Miyazawa).

Tasogare seibei or The Twilight Samurai is a heartfelt elegy about man who doesn’t want to rise above his station in the world, but just wants to take care of his children and mother. Director Yoji Yamada takes a huge risk in losing his audience’s patience with the film’s slowly moving character drama. He focuses on somber, everyday detail to build Seibei’s character, a taciturn and impoverished man who eschews happiness for duty to family, as if they were mutual exclusive.

One might be fooled by the title, but this isn’t some martial arts slash fest. Seibei’s existence is bookkeeping and piecework to put food on his family’s table. However, there are hints at his past, both as a warrior and as a husband who believes that his late wife was disappointed in his material status, that come through gradually in this film. Thankfully, Sanada has the patience and acting chops to play with such sorrow until the film does have a chop-socky moment – a muscular and awkward fight scene that is more about one’s status in society than it is about power and violence.

There are good performances all around, and the voice over narration by an adult Kayana enhances the story of the father and adds easy commentary about this particular era of Japanese history. The Twilight Samurai, a 2004 Oscar nominee for best foreign-language film, is an eloquent domestic drama that doesn’t play to the usual samurai melodrama and shtick, but is still as moving as the most battling samurai films.

Posted by Leroy Douresseaux at 9:45 PM