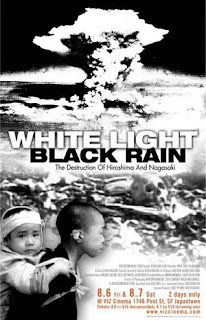 VIZ Cinema, the nation’s only movie theatre dedicated to Japanese film, is proud to present a screening on August 6th and 7th of Academy Award-winning filmmaker Steven Okazaki’s White Light / Black Rain, a moving documentary about the atomic bombings of Hiroshima and Nagasaki that brought about the end of World War II.

Tickets are now available to attend a special Premiere Event for White Light / Black Rain on Friday, August 6th at 7:00pm that will also include a Q&A session with several survivors and the Friends of Hibakusha, a San Francisco organization dedicated to supporting U.S. citizens and Japanese-American survivors of radiation exposure from the bombings of Hiroshima and Nagasaki. A portion of ticket sales will be donated directly to the Friends of Hibakusha.

Tickets for the event are $15.00 and are now available for purchase online at the NEW PEOPLE / VIZ Cinema web site at: www.vizcinema.com. General admission tickets for the screening on Saturday, August 7th (no reception or Q&A) are $10.00. No discounts apply.

After 60 years, the atomic bombings of Hiroshima and Nagasaki on August 6th and 9th, 1945, continue to inspire argument, denial and myth. White Light / Black Rain provides a detailed examination of the bombings and the aftermath and features interviews with fourteen atomic bomb survivors (known as hibakusha), many who have never spoken publicly before, as well as four Americans intimately involved in the bombings. While Japan would go on to emerge as a leading global economic power in the wake of World War II, the country’s psyche would remain forever altered by these terrible events. Through a succession of riveting personal accounts, the film reveals the unimaginable destructive power of atomic weapons, the inconceivable suffering, and extraordinary human resilience of the survivors.

Director/filmmaker and third generation Japanese American Steven Okazaki has explored the Japanese American experience extensively through a variety of acclaimed documentaries. He has received a Peabody Award and been nominated for four Academy Awards and won an Oscar in 1991 for his documentary Days of Waiting: The Life & Art of Estelle Ishigo. He also was a co-recipient of the 2008 "Exceptional Merit in Nonfiction Filmmaking" Primetime Emmy Award for White Light / Black Rain. Okazaki is based in San Francisco, CA.


About NEW PEOPLE
NEW PEOPLE offers the latest films, art, fashion and retail brands from Japan and is the creative vision of the J-Pop Center Project and VIZ Pictures, a distributor and producer of Japanese live action film. Located at 1746 Post Street, the 20,000 square foot structure features a striking 3-floor transparent glass façade that frames a fun and exotic new environment to engage the imagination into the 21st Century. A dedicated web site is also now available at: www.NewPeopleWorld.com.
Posted by Leroy Douresseaux at 8:49 AM