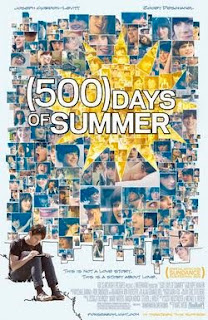 The film focuses on Tom Hansen (Joseph Gordon-Levitt), a trained architect who works as a writer at a Los Angeles greeting card company. He is also a young man who believes in that one-of-a-kind love – the soul mate – that person destined to be his one and only. So when this hopeless romantic meets his boss’ new assistant, Summer Finn (Zooey Deschanel), the fuse is lit and it’s Day 1 of Summer. Tom is so certain that he has found the woman with whom he will spend the rest of his life.

Problem is, Summer doesn’t believe in destiny – not at all, which doesn’t stop Tom from going after this lovely, witty, intelligent woman. Still, Tom and Summer begin to date, although she tells him that she does not believe in true love and does not want a boyfriend. When Summer suddenly dumps him, around Day 290, Tom begins to sift through the days they spent together, looking for clues as to what went wrong as he heads towards Day 500 and a revelation.

(500) Days of Summer uses a nonlinear narrative to tell the story, jumping backward and forward over the 500-day span of Tom and Summer’s relationship. I don’t know if that really does anything for the film. It feels more like a gimmick than a storytelling structure that would actually benefit the story. In fact, moving about in time so much causes the middle of this film to dry up to the point of being catastrophically dull.

What sets (500) Days of Summer apart from standard movie love stories is the role reversal. This time it is the male character, Tom, who is clingy and smitten and believes in true love, a role usually assigned to the female character. Summer is more like the guy character found in the typical romantic comedy (or rom-com). She’s doesn’t buy into destiny and the boyfriend-girlfriend dating game. Summer just wants to have fun with no strings attached and no commitment – a trait usually applied to shallow male characters.

I think that having the guy character be so lovelorn and infatuated is a novel idea, but having that character performed by a talented actor like Joseph Gordon-Levitt makes him more than just a novelty. Gordon-Levitt gives Tom richness and depth so that he is more than just charming and sweet. A love-struck fool, he is determined to grapple with the issues of love and romance in a way that will not always give him a satisfactory outcome.

Sadly, Summer is not as well developed as Tom, and the character is more of a supporting player. Luckily Zooey Deschanel is pitch perfect in her usual deadpan way, and her brooding turn as Summer makes the character more than the shallow creature that the screenplay seems to think Summer she should be. Deschanel has a way of surprising us in the way she makes Summer’s emotional displays, her smiles and frowns, seem unexpected and… well, delightfully surprising.